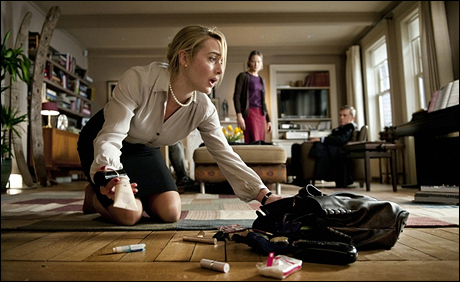 After an argument, one ten year old boy hits another in the face with a stick. The next day, the parents meet to sort out things in a polite and civilized fashion. Let the politically correct mayhem commence!

After his political thriller THE GHOST, Polanski returns to the big screen with a brilliant comedy about two upper-class couples descending into uncivilness and tapping into problems that go far beyond a playground fight. The film is surprisingly short, having only 79 minutes including credits, and the time passes even quicker thanks to Polanski’s impeccable timing and rhythm. The flow of the action slows down and pauses just as the mayhem gets too weary, and speeds up again just before the audience can get too comfortable. And this is an uncomfortable film, especially in the first part when the couples constantly pendulate between genuinely trying to be nice and snarling politely at each other. Memories of WHO’S AFRAID OF VIRGINIA WOOLF? are evoked as you feel as though you are trapped in a room with a couple arguing. It makes you want to be somewhere else, yet you cannot listen away – but the awkwardness is perfectly complemented by the humour of the dialogue and the situations.

The film is based on a play which takes place in a single house and develops in real time, creating a claustrophobic sense which adds to the tension. It is not easy to successfully transfer such a static text to the screen, but Polanski manages to pull it off, especially since he has the help of this brilliant cast of four, three of them Oscar Laureates (Jodie Foster, Kate Winslet and Christoph Waltz and one nominee, John C. Reilly). There is a strong chemistry between them, drawing the audience in from the first minute, and, as politeness turns into mayhem, they show the true depth of their talent as the characters drop mask after mask after mask. An intelligent comedy, it will have you laughing furiously as you turn and twist in your seat at every awkward moment, and you will love and lovingly hate every second of it.