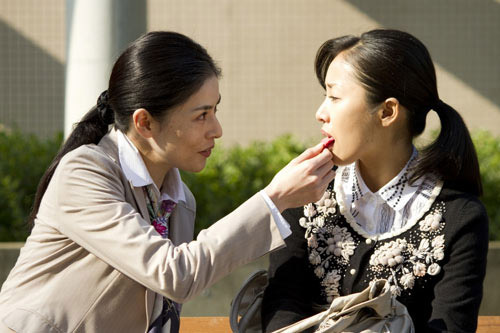 Sion Sono’s latest cinematic treatise on sex, madness and death, GUILTY OF ROMANCE, lacks the freshness and exuberant charm of his earlier work and, despite some bravura direction and eye-popping cinematography, often feels ponderous, mean-spirited and tawdry by comparison.

Whereas LOVE EXPOSURE was an exhilarating (if overlong, indulgent and utterly unhinged) exercise in trashy exploitation cinema with a heart, GUILTY OF ROMANCE suffers from a strange coldness and lack of compassion towards its characters. As the film’s protagonist begins her descent into prostitution and squalour, Sono turns voyeur and fails to strike the delicate balance between depicting misogyny and glamourising it, compromising the integrity of the film and leaving the viewer feeling complicit in her degradation.

There are some interesting ideas at the heart of the film regarding women taking ownership of behaviour that humiliates and demeans them in a misguided attempt to liberate themselves from male oppression. Unfortunately, these get lost in 112 minutes of meandering narrative that fails to weave its wildly disparate elements together, clumsy references to Franz Kafka and histrionic monologues so overwrought that they quickly become tedious.