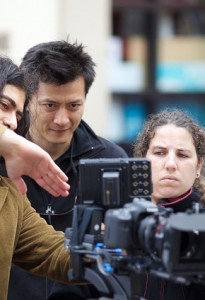 Jorge Cham is the creator of popular webcomic PhD Comics, Piled Higher and Deeper, and one of a few professional webcomic artists. He has recently completed a film version of the strip which is being shown at campuses and other places worldwide. It was recently screened in Cambridge, and Jim Ross got the opportunity to ask him a few questions about the project.

Piled Higher and Deeper is a great success as a web comic, what made you want to bring it to film?

Thanks for calling the comics a success! I saw bringing them to film as an interesting challenge. Everyone kept asking me when an animated or live-action version was going to happen, and finally I just decided
to do it. The initial idea was just to do a little experimentation with live action, but the project grew into a full movie as more and more people came on board.

The comics do a great job of encapsulating a lot of the grad student experience, often through devices such as graphs and charts as well as some of the character situations, how did you approach translating them to the screen?

The biggest decisions were probably which character to make the focus of the movie, and what tone the movie should take (broad comedy, slice-of-life, etc.). Ultimately, I just decided to make it as true to the comic as possible. For the character decision, I knew part of the charm of the comics was that it followed the lives of several characters that people could identify with. I decided it would make an interesting story structure to have two parallel storylines that only intersected at key moments. The comics are written the same way, where they focus on one character for a while, then it switches to another. I knew there had to be satisfying story arcs, so I grouped together strips with common themes and mapped out an overall story that expressed my general feelings towards academia and the PhD journey. In terms of tone, the comics are also very eclectic, so the movie is a nice mix of broad, smart humour and moments of real emotion.

Do you think folk who are only passingly acquainted with the comics will be able to get something from the film, or is this more aimed at the huge following the comics have?

I wrote the movie specifically for people unfamiliar with the comics, but with a lot of details the fans would notice and appreciate. I knew as a fan part of the fun is to see how exactly the comics are adapted, so I tried to play with that too. People who’ve never read the comics or who never went to grad school tell me they enjoy the movie a lot. I knew early in the writing that what was universal about the graduate school experience is the idea of youth in limbo, or delayed adulthood. Of having high expectation and ideals, but feeling stuck and not knowing what you’re going to do with your life. Grad school just extends that for a few extra years for some people.

The film is being screened at campuses on request, are you surprised at how many screenings have been asked for?

Absolutely! It’s been amazing. We’re now screening at over 300 locations in all 7 continents, which is super cool. Both the demand and the support for the movie has been mind-blowing for all of us involved in the movie. It’s made for a very busy last few months.

Do you see this model as a good one for low-budget movies?

Yeah, I hope so. With the Internet, anything is possible. I think the webcomics mentality has definitely helped us to think outside the box and outside how you’re “supposed to do it” when it comes to film making and distribution. Wait until you see what we have planned for the DVD release.

What made you want to release it this way first rather than as a digital download, streaming or similar?

The more we got into making the movie, the more I realized that we were making a really good quality film. Perhaps it wasn’t up to high-budget standards, but I knew that it was true and unique in the way we made the movie. I felt it deserved to be seen in big screens and with large audiences, so the idea of the screenings came up.

Where is the strangest place you know of there being a screening?

Well, the current schedule has the movie screening in Antarctica, in McMurdo Station the day before New Year’s eve.

Have you always wanted to try your hand at film making?

Ha! I thought I was going to be an engineer, never mind a professor, a cartoonist and now this. When I was growing up in Panama, it didn’t even occur to me that there was such a thing as a “cartoonist”, i.e. someone who does it all the time. Making movies was even farther from the realm of possible realities. So, I think I’ve been lucky, and it’s all thanks to the fans.

Do you think any other web comics would lend themselves to a film version?

Absolutely, and I hope they all give it a shot. With my comics, it’s just me in front of a computer creating this reality. But with a movie, there are so many people who add their own creativity and craft that it becomes something bigger, I think.

What movie, before The PhD Movie of course, would you say reminds you the most of being a grad student?

One movie I looked at closely was THE PAPER CHASE, which was made in the 70s and which was turned into a TV series (it’s about Law students at Harvard). In the DVD commentary, one of the filmmakers says the reason it was a success was that anyone could relate to that feeling of being out of your depth and having to prove yourself. I thought if people could relate to Law students at Harvard, they could
relate to scientists at Caltech.

Visit the PhD Comics site for more information on screenings.