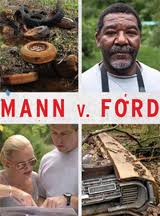 This 2010 HBO production follows a community of Native Americans as they are trying to find justice after learning that the rainbow coloured sludge the Ford Motoring Company has dumped on their land during the 60’s is actually highly toxic.

The comparisons to the 2000 Julia Roberts drama don’t stop here, for on the horizon the rescuer appears, a spunky female lawyer. A southern accent, a go-to attitude and an optimistic determination make her an appealing character, as the filmmakers themselves must have noticed, considering the movie often seems to center on her.

There is clearly enough material for a moving movie, yet the directors do not seem to be able to handle it effectively, the product never surpassing its ‘made for TV’ feel.

Throughout its course the movie retains a stubborn one-sidedness; victims are interviewed in a Church, the lawyers reinterpret anything said by the plaintiffs into an eloquent monologue, which in any court-room drama would stir calls of “Objections, they are leading the witness on”, and no opposing opinion is ever presented, these elements giving a pervading feeling of self-righteousness.

But as the toxic waste permeates into the ground beneath, the real emotional moments permeate the parade of victimization, and moments such as the one where one community member lists all those who have died or are suffering of cancer on one street, nick-named “Cancer Row” (nearly everybody) are truly gut-wrenching, and are the saving element of the film.