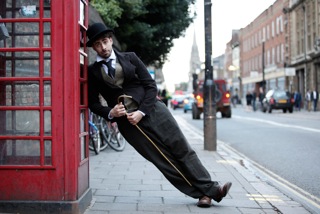 Deepak Verma’s comedic, feel-good short film was an enjoyable dedication to Charlie Chaplin. With a large portion of the film made in the slums of Mumbai, the film is set in the aftermath of the 2001 earthquake, and the Charlie Chaplin cult that ensued with the intention to bring back laughter.

Sepia silent movie style reels bookended the 29 minute film, acting as thematic elegies and enticing the audience into an old-movie nostalgia that the film so consistently alludes to. Kicking off with an over-stressed workaholic (played convincingly by Jace Desay) dissolving into a panic attack at the prospect of chairing his father’s meeting, the film follows his transformation into a carefree Chaplin follower with the help of the taxi-driver and the fantastically played ‘doctor’. The location for the film is cleverly chosen, as this society worships Chaplin as deeply as the religious devotion that is identified with Indian culture, the taxi-driver having a Chaplin ‘shrine’ and the society even singing ‘You are my faith’ in the finale when celebrating Chaplin’s birthday.

The Chaplin mannerisms were encapsulated fantastically by the actors, and although perhaps over-egged as the film went on, the physical comedy fuelled the film. A poignant climax to the film was a reading of the speech from ‘The Great Dictator’, lamenting the loss of humanity as the world advances, a theme as relevant today as it was 70 years ago. Above all, the movie stresses the magic of film and the need for laughter, and we should watch this space; the makers are thinking of adapting the short into a feature length film, and with a story as charming and original as this, I’m sure it’d be a success. For me, the film is perhaps best encapsulated when the protagonist picks up a chilli and uses it as a Chaplin moustache to encourage a smile in his audience; Chaplin, Indian style. 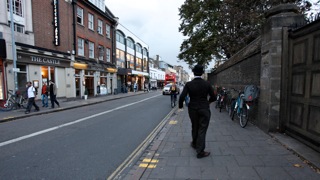 One thought on “Mumbai Charlie”