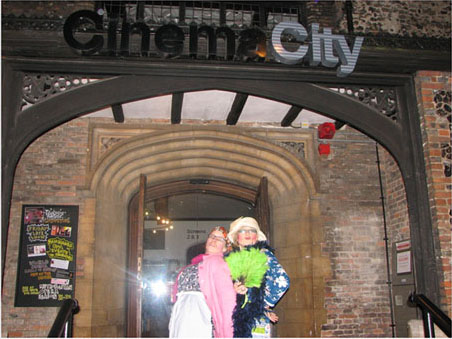 A quiet pre-show drink in the bar at Cinema City, Norwich is suddenly disturbed by a small group of men waving bras and inflating balloons. Not another stag night but preparation for dance by the Norwich Kitwitches (pictured above and below).

The Kitwitches are a molly gang. East Anglian folk dancers, for whom cross dress is an integral part of the act. The kitwitches are later seen dancing in front of the cinema and are briefly featured in the wonderful THE BRITISH GUIDE TO SHOWING OFF.

The film follows the extraordinary career of an extraordinary man. Andrew Logan, artist, sculptor and party host bar none, is the subject of this weird and wonderful documentary. Andrew’s Alternative Miss World competition is a chance for the flamboyant and extravagant to really go to town and show off. The first event took place in 1972 and there have been 11 of these mind-blowing events since.

David Hockney, we are told, helped judge the first show – Bowie couldn’t get into the second …

Despite a disregard for celebrity, the show has attracted and influenced a range of notable artists, musicians, actors and designers. David Hockney, we are told, helped judge the first show – Bowie couldn’t get into the second – but the show still features entries from Andrew’s family and friends alongside competitors including a Russian performance artist and a Nigerian transsexual. The film is surprising, shocking and funny by turns and features an incredible cameo appearance from Brian Eno’s cat!

Filmmaker Jes Benstock and Andrew Logan were on hand to answer questions from the audience after the screening. Asked about distribution, Jes said that ‘the multiplexes saw the film and didn’t know what to do with it’. No great surprise there, but the film is on limited release across the country and is to feature in international festivals in the new year, showing the world just how good us Brits are at showing off. 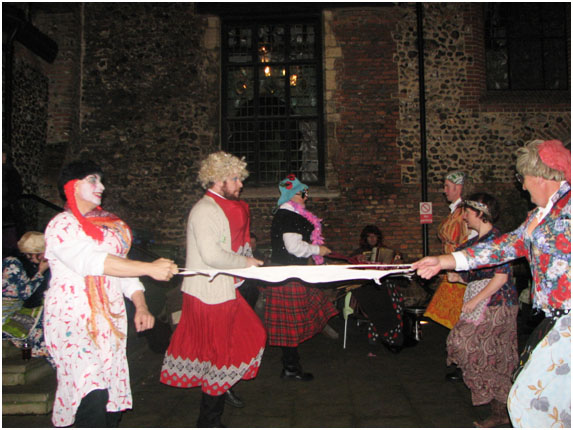 If you are keen to know that you’re not the only extravagant show off or just need shaking out of your comfortable, conformist existence – go see this film!

THE BRITISH GUIDE TO SHOWING OFF is screening on 9 and 10 December at Cambridge Arts Picturehouse. Book tickets here.