Walking through Norwich to the cinema is not usually a surprising experience, but Saturday’s visit was not a normal trip. A casual glance across the street and a man is carrying a ukelele, further on and there is another, then more. The density of instruments increases as we converge on the cinema for a showing of THE MIGHTY UKE.

The film is a documentary exploring the recent upsurge of interest in the jumping flea. Currently on a UK tour, THE MIGHTY UKE is accompanied by a Q&A with director Tony Coleman, a performance by virtuoso James Hill and a mass strum along from the audience. 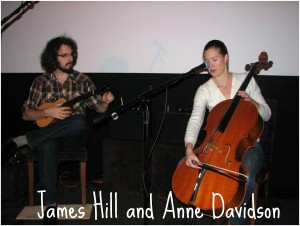 The film sprung from a personal interest of the director and was shot, animated and cut by him and Margaret Meagher. We are taken from the shores of Hawaii to see the uke in action across the world: jews and arabs strumming together in Israel, ukelele afternoon in Tokyo and the extraordinary Vancouver ensemble, featuring a host of talented teens.

…the uke is far from the comedy plaything it is thought to be.

One of the alumni of this wonderful group is carving a career from the tiny instrument and played after the film. Accompanied by his partner Anne Davidson, James Hill treated us to a short recital showing the incredible range of this often under appreciated instrument. Canadian fiddle tunes, jazz songs and a mind-blowing multilayered rendition of Michael Jacksons’ Billie Jean showed that the uke is far from the comedy plaything it is thought to be. 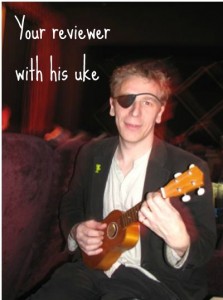 As a stand-alone, the film is an engaging and interesting piece of work and the 90 minutes flies by as we are led from unexpected information – the uke originates in Madeira and only reached Hawaii at the end of the 19th Century – to amazing performance, do check out Jake Shimabukuro on Youtube! The Q&A and chance to play alongside the filmmakers lifts the experience and left all the audience smiling as they left.

As the director said, “there are so many different kinds of music that come from this thing, but the musicians are always smiling and laughing”.

Next stop for THE MIGHTY UKE is Northern England and then Scotland. Click here for tour dates.