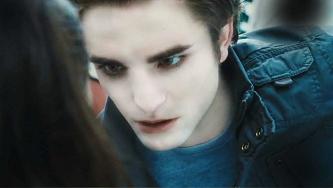 It is quite amazing, the level of abuse a man will receive for openly stating that he will be attending a TWILIGHT marathon – or “Twiathlon”. The convulsed look, as they utter “Why!?” is an almost pitch-perfect mesh of pure confusion and disgust that must surely be unique to this particular instance in life. In fact, unless the next words out of your mouth are “I’m writing a review” you might as well leave any male – and quite a few female – friendships behind. A particularly vociferous acquaintance, who had been dragged to the first three films, went so far as to state that only a freak plot-twist introducing Buffy could induce him to watch the fourth.

Having never seen or read anything even partially TWILIGHT before, I honestly didn’t see what the problem was. How bad can vampires and werewolves be? If anything, as a virgin to the whole series, this only hardened my resolve to find the positive. However, even now, writing this 45 minutes before the grand opening of ten hours of one of the least active marathons of all time, I feel it necessary to declare to my physical and mental well-being. Firstly to prove to all those who know me that the strait-jacket is not needed; secondly, in the hope that I will leave the cinema at two o’clock in the morning in the same state.

Well, I must admit the incredibly over-dramatic pump-up music preceding the film sadly did little to enthuse. Everyone seemed a little disconcerted by the thumping bass that must have been left over from a RAMBO marathon. By “everyone”, I mean 5 or 6 huddled couples and two very large groups of teenage girls, both of which entered during the opening credits, and both of which whooped at the first sight of Robert Pattinson. Not doing much to dispel the stereotype there. Regrettably, I have to say that the film was a bit of a disappointment. Not terrible, but cliché seemed to be hanging on every frame like a stuffy odour. How the mood-lit piano scene in particular made it into the final cut, I really have no idea.

On the positive side, there was a really nice rainy-grey style to the whole film that did capture the feel nicely. The central relationship was a bit of an enigma to me. Physically the pair interacted so naturally, but the moment they opened their mouths we were suddenly transported to a daytime soap. Probably the most promising aspect at this time is that I’m still looking forward to the next film. I remain bruised but not broken. 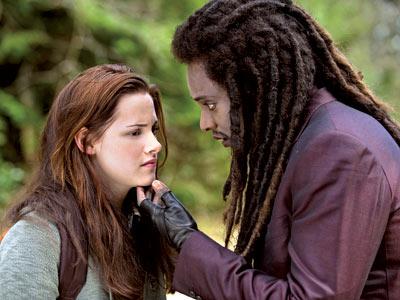 I think I have just witnessed one of the worst pieces of advertising in history. Before both films, a trailer of BREAKING DAWN: PART 1 has been shown. Maybe they’re worried we may have forgotten there are 4, not 3 films in the marathon. I wonder if it will precede ECLIPSE. The cinema feels a lot like a plane journey now. The seats are moulded; the slightly too-warm temperature is just on the wrong side of irritating; and I’m a little bit sweaty and tired now.

Luckily, NEW MOON was enough to keep my mind off it. I honestly think the best way to watch NEW MOON is straight after TWILIGHT. You’re so grateful that the bombardment of cliché has ceasefired that you’re willing to forgive the film almost any inadequacy. Much tighter, much silkier, and dealt with what clearly is a poor hang-over of a story quite well. I don’t think that anyone involved in the film or book can really deny that this film is just a fill-in period for the next few films; but as I’m about to see the next couple of films I’m not quite as fussed.

What do you know? We were given another helping of the BREAKING DAWN trailer. Two is never enough. Once again ECLIPSE is an improvement on the last. However, I have noticed a trend in all the films to introduce the two alpha-males with a slow-motion money-shot of them pouting as music blazes overhead. I can’t help but think that it’s not meant for me somehow.

… you can’t help thinking that school is the real loser in this series.

It’s a real shame in many ways that the first film was such a wash-out, because from what I can tell it was by far the best story. There has really been an unsolved problem with balancing the thread of the relationship, and the thread of the plot-narrative. I still haven’t really been engaged as much as I’d like, but you can’t help thinking that school is the real loser in this series. How any of these characters graduated I have no idea, with all the truancy left, right and centre. As for myself, there is a slight wish to skip class. Nothing too much to do with the films, but my eyes are starting to strain and there is that horrible staleness wrinkling up my skin from too much air-conditioning. More than anything, my brain does feel a lot like the sludge you might find in a half-melted ice-cream. Let’s hope that the last film is not preceded by its own trailer.

Well, I don’t want to give too much away about the film. If you want to know more, read the separate review; but what I will say is that I left the cinema shaking and not feeling particularly great – physically or mentally. The last thing anyone wants to see after nine and a half hours of film time is a complicated birth, especially not one done vampire style. The film’s opening was serenaded with whistles and cheers from everyone. They weren’t doing that after it had finished. It’s hard to say whether the utter exhaustion had made us all far more susceptible to the gore and stomach-churning; but I don’t think it was particularly appreciated. Oh well, always next year.

6 thoughts on “Twilight to Twilight”