“When you’re trying to sell a film to producers or financiers, they all want to know what other film they can reference it to,” says Dom Rotheroe. If you’ve seen either one of his dramatic tales of obsession, the award-winning MY BROTHER TOM and EXHIBIT A, you’ll find it difficult to make any such comparison. Pushed, you might end up clumsily suggesting that EXHIBIT A, winner of the Jury Prize at Raindance in 2007, could be described as “Brendan Gleeson channelling Geoff Tipps in an episode of Eastenders conceived by Shakespeare and directed by Michael Haneke”. What a clumsy way of extolling its ghastly humour, its bloody sincerity, its intimate reality. The script is part-improvised, the camerawork all undertaken by the performers, but we know from Mike Leigh that improv can kill naturalism; and we’re all sick to the back teeth of “found footage” and its tropes.

EXHIBIT A works, though. It raises social issues – not least the state-funded exploitation of consumer society in the UK, by the Lotto and the “buy now pay later” culture – but this is a simple and terrible portrait of obsession. Rotheroe has filmed in Bosnia and Timor, and documented an eco-revolution in the Solomon Islands (THE COCONUT REVOLUTION), but his dramas and documentaries are all centred around characters in extreme situations. 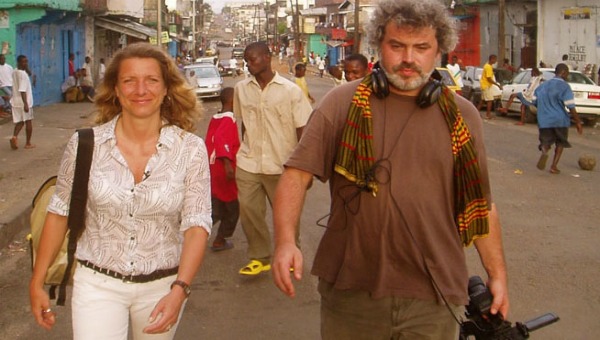 Rotheroe’s TV documentary “A Sarajevo Diary” was nominated for BAFTA’s Robert J. Flaherty award in 1994, and his latest project is a contribution to the “People and Power” TV series. I asked him whether this latter title represented a recurring theme in his work.

DR: Yes, the “people versus power” theme is certainly something I return to consciously in docs. But it’s never been a conscious theme in my feature writing. The only theme I’ve become aware of that I’ve always been drawn to in any drama I’ve done is that of obsession, which fascinates me. I always described MY BROTHER TOM as an obsessive love story. And I’d say exactly the same about EXHIBIT A. The first is about both the beauty, tragedy and possible transcendence of obsessive love; the latter, I guess, is a more tragi-(and sometimes)-comic take on the same theme. Any social issues in either film were more secondary to me. It’s passion, however distorted, that attracts me to characters – which also translates to the best docs I’ve made because they were centred around characters in extreme situations (war) who were passionate enough to risk death to protect what they held dear. 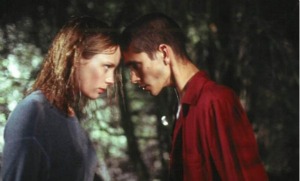 I’m a minor obsessive, but it’s in the company of such people that you realise what the word ‘conviction’ really means. Of course, that’s very often a bad thing, but in certain circumstances it changes and saves lives. Tom and Jessica in MY BROTHER TOM, I can envy; Andy in EXHIBIT A, I certainly don’t. Though I love him as much. Since I was a teenager I always treasured Yeats’ ambiguous lines – ‘The best lack all conviction, while the worst are full of passionate intensity.’

after our first day’s filming I was very eager to tell everyone that this was one of the best, if not the best young actor in Britain.

After MY BROTHER TOM Ben Whishaw‘s career blossomed – and Bradley Cole was nominated for “best newcomer” at Raindance. You’ve obviously got a keen eye for a good unknown performer. What do you look for in an actor?

I guess the main thing I look for in an actor is the sense that they’ll do something different and not do things in some expected way. That they’ll surprise me, make an emotion more true and complex than the way I’ve thought of it. When Ben came in it was more talking to him than the audition that made me go for him. He was about the only introvert actor we saw, had his nervous mannerisms, talked about sitting alone in his room reading Sartre. He was clearly uncomfortable in such an audition situation, as I would be, but that also had in spades the sensitivity I was looking for in the character. I’m not one for snap judgements, but after our first day’s filming I was very eager to tell everyone that this was one of the best, if not the best young actor in Britain. I still think that.

With Bradley it wasn’t so quick and it took a while for me to make up my mind, but by then I was doing auditions which were more like improvisations. Bradley is the complete opposite of Andy’s character, but there was a conviction in his improvisation, something cuddly yet desperate and dangerous, especially in his eyes, that made me go back to the tapes of him again and again. And I’m so glad I did.

A difficulty with the “found footage” approach is that the audience needs to be convinced that the camera operator has a rational reason for filming in a context of high jeopardy. Was it difficult to make this method work for EXHIBIT A?

Well, the actors, who weren’t trained in camera, did shoot all of the film themselves. Naturally they got better at it as we went along, but I felt that reflected a natural progression the characters would have had. But, yes, we cheated, we redid scenes so the camera was pointing where we wanted, etc.

And, yes, it was incredibly difficult to make found footage work in this film as we’d also taken on the conceit that it was all edited in camera, and hadn’t been found and edited as, say, in Blair Witch. The conceit was of an uncut found tape and that proved very hard in the editing and shooting when we were faced with having to cut down long single-shot scenes and make it seem like the person turning off the camera had a reason to do so. At the beginning we felt it might be the easiest of edits; by the end it was by far the hardest.

MY BROTHER TOM and EXHIBIT A share a realism that’s so close to the bone it’s occasionally uncomfortable – although MY BROTHER TOM had a fairytale quality that added a new layer. What other directors or writers have influenced you in using this style? How would you describe your artistic principles?

The realism in those two films was both pragmatic and content-based. My initial vision of MY BROTHER TOM was much less handheld, with more controlled camerawork. But getting finances for such a film was taking a long time. When you’re trying to sell a film to producers or financiers, they all want to know what other film they can reference it to. I couldn’t give them one, but then BREAKING THE WAVES came along and I thought, ok, I can point them to that. And then FESTEN came along and I thought, well, we can cut the budget and do it on video, because that’s now accepted as commercial.

Artistic principles – I tend to think that anyone who has any is not an artist. Maybe I’d only say – sincerity.

Plus the handheld aesthetic worked for me and the intense obsessiveness of the story. And plus plus I was very nervous of directing young actors in my first feature and the more freedom I could give both them and me, making the camera secondary, seemed like a good thing. So the ‘realism’ came from both ‘artistic’ and practical ideas. And certainly the Lars Von Trier who made BREAKING THE WAVES was an influence, as I was using his DOP, casting director and a couple of shared actors.

In EXHIBIT A, the film couldn’t have been in any other way than home video, because of the nature of the film. But ‘handheld’ is not my general style. It was suitable for those two films, was very different with shorts I’ve made, and I hope will evolve depending on the subject on the next feature. Artistic principles – I tend to think that anyone who has any is not an artist. Maybe I’d only say – sincerity. Bad, good – I don’t judge if people fail or not, as long as they are trying sincerely.

Buy EXHIBIT A from the website – whence a percentage of the profits will go to the NSPCC – or rent it from LoveFilm. Do it.