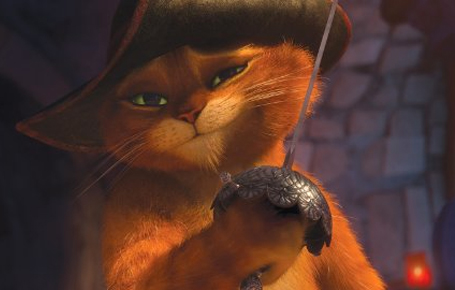 So, I went in expecting a promoted-to-the-big-screen-straight-to DVD sequel/prequel/spin-off but instead, PUSS IN BOOTS is at the very least an equal to the four SHREK features that preceded it. The story craftily mixes and riffs on several fairytales and nursery rhymes (Jack & the Beanstalk, Humpty Dumpty, as well as our titular hero) much like its predecessors, giving each of them a new and unique spin – but now, naturally, with added Zorro. And Puss himself delivers in spades. Antonio Banderas’ charm oozes through so comfortably, being front and centre hasn’t harmed or stretched this lovable feline character one bit. In fact, we’re even given a backstory that fits his boots so well you’d swear you’d heard it before.

The new characters, Kitty Softpaws (Salma Hayek), and Humpty Dumpty (Zach Galifianakis) could easily become annoying but somehow pull it off with equal ease, even providing some big laughs themselves. (But my kids’ favourite had to be Bob Persichetti’s “Ohhh cat”, proving that the comedy rule of three is alive and well).

The action is up there with the best, including a dazzling sequence as our heroes try to steal the magic beans from a moving wagon. And there are plenty of in-your-face 3D moments to be had too… I expect, as I opted to watch the 2D version (not a fan of 3D!).

All in all, terrific fun for all ages.

If you enjoyed this post, TAKE ONE would like you to consider making a donation to Cambridge Blue Cross. Your money will go towards the upkeep of homeless cats such as Reno (below) who, we are pleased to report, has gone to a new home since being chosen as the “puss in boot” (sic) mascot of this feature.