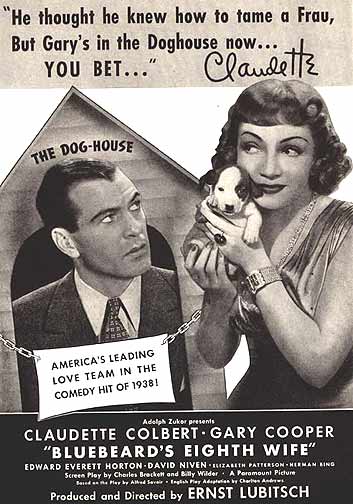 Seattle’s Grand Illusion Cinema, the city’s longest running independent theater, recently featured BLUEBEARD’S EIGHTH WIFE in its series, A Touch of Lubitsch (“to be continued when we get more Lubitsch on 35mm reels”). This was my first film experience at Grand Illusion; sitting in its cozy little theatre is pure aesthetic pleasure for anyone who loves movies, and the dedicated chatter of the other theatergoers was proof of the neighborhood cinema as cultural institution.

Hollywood’s inclination to remake previously successful films for fresh audiences is nothing new: Paramount first made BLUEBEARD’S EIGHTH WIFE as a silent feature starring Gloria Swanson. Both the original and Lubitsch’s 1938 remake are nominally based on Perrault’s fairytale of a woman who marries a nobleman with a room full of previous wives, all murdered.

Far lighter in tone is this tale of a penniless French aristocrat Nicole de Loiselle (Claudette Colbert) and a thrifty American millionaire Michael Brandon (Gary Cooper).  Brandon, who claims his impulsive decisions are the secret to his financial success, meets and proposes to Nicole. Nicole initially resists, feeling Brandon sees her as a commodity rather than a person, but she is attracted to him. She accepts his proposal, only to discover that she is his eighth bride. Indignant, and fearing he will not take the marriage seriously, she sets out a pre-nuptial agreement that doubles the terms he’s settled on previous wives, then checkmates him when she refuses to engage in either lovemaking or arguing, “nothing married couples do.” 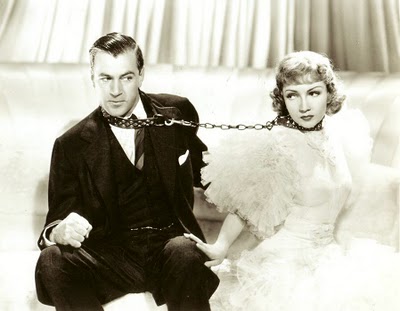 Social mores of the time might have cast Nicole as subordinate to Michael, but Lubitsch never does.

Occasional violent threats expressed by Michael towards Nicole made me flinch, as they seemed both antediluvian and preternaturally intense for romantic comedy. Considering the grim source material, I noted a scene in which, taking a cue from Taming of the Shrew, Michael slaps Nicole: she promptly slaps him back.  One strategy ahead at every turn, Nicole wields a keen intelligence in their standoffs, but when physical strength is used, at no point is she outmatched. Social mores of the time might have cast Nicole as subordinate to Michael, but Lubitsch never does.

Cooper’s bluff businessman was criticized when the film was released, but the charismatic energy of the repartee between Cooper and Colbert carries the story. Edward Everett Horton is grand as Nicole’s endlessly opportunistic father, and a young David Niven has some seriously funny business as a pawn in her game.  Funny, quick, and bright, this supposedly lesser Lubitsch comedy offers modern audiences the pleasure of well-executed, witty romance.