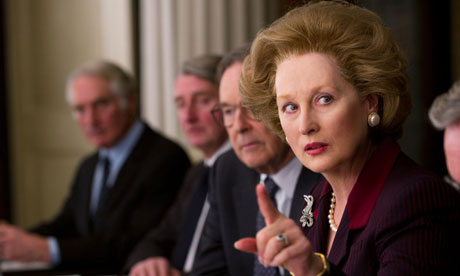 Thatcher (“MT” to Denis) was, in her day, the least popular Prime Minister ever. Phyllida Lloyd’s THE IRON LADY is strangely silent on this. We do see MT in her pomp, serenely indifferent to the crowds outside the ministerial Jag, screaming in rage and disgust and spite—but nothing on why she was so hated and loathed and detested. Seems an oversight.

Perhaps the detachment of those scenes prefigure, in retrospect, MT’s isolation as an elderly woman determined to ignore, then banish the Scotch-fuelled hallucinations of rampant dementia. The dead hand of the Vienna quack lies heavy on almost every scene of Abi Morgan’s screenplay, full of psychoanalytic not-quite-explanations of this extraordinary character. Did the Number 10 staff really give her a “Roberts” radio as a parting gift? It’s a gift to the symbol-minded film-maker, neatly tying up all those flashback vignettes of young MT (a winning Alexandra Roach) gazing adoringly up at the Honest Grocer of Grantham. It’s all his fault. His. Him. He. If it’s not Dad, it’s hubby (Jim Broadbent—mostly imaginary and often sinister; Harry Lloyd—young, real, funny) or the unseen son Mark, or her all male Cabinet, deliciously cast with faded smoothies (Tony Head, Richard E. Grant, et al). That could bear more examination.

Technically flawless performance, Actor’s Acting for Actors, in (when you right get down to it) a slightly dull and worthy award-bait movie about “issues”.

The only other woman with significant screen time is Olivia Colman’s panto Dame Carol Thatcher. It says something for Colman that she can more-or-less overcome the audience’s affection for her as a performer, to so effectively inhabit Carol’s grotesque silhouette. And now the elephant in the room: Streep. Technically flawless performance, Actor’s Acting for Actors, in (when you right get down to it) a slightly dull and worthy award-bait movie about “issues”. Iron Lady really was released in 2011, just, and so here is Streep with Golden Globe in the bag and duly nominated for a Best Actress Oscar. Better justified is the nomination for Best Makeup. The illusion of an old, old woman is astonishing. And her performance is of course brilliantly researched, nuanced and precise, and utterly unmoving. A once proud old lady fighting the good fight against the last indignity should be a cathartic tear-jerker. But no. The Acting gets in the way. Added to which, Streep is fighting an up-hill battle, as I have made of my heart a stone – because I do remember why all those people were screaming outside the Jag.