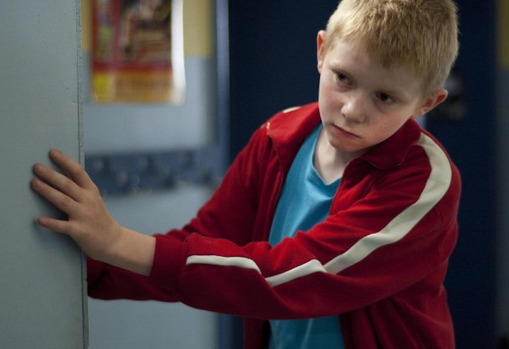 THE KID WITH A BIKE marks Belgian brothers Jean-Pierre and Luc Dardenne’s return to one of their most cherished themes: childhood in its troubling facets. The initial sequence, where a red-haired, nervous adolescent insists on telephoning his father, who never answers and then bursts into incontrollable outrage, throws the spectator into a journey of emotional unrest and tension.

The film can be seen as a study of characters and their development through the unexpected relations that form and the challenging contexts in which they find themselves entangled. From the beginning, a compassionate camera accompanies and faithfully stands by twelve year old Cyril (Thomas Doret) throughout his desperate attempt to first regain his neglecting father (Jérémie Renier) and subsequently come to terms with his abandonment. The bike from which he gets inseparable becomes literally and metaphorically the instrument with which to pursue his quest for love, and rides him into the several turns of fate he has to face.

The film strikingly balances the sweet with the sour: the superbly organised sequence which sees Cyril eventually meeting his father poignantly highlights the twofold tone the film is built upon. While the harshness of his unloving father slowly manifests itself as cowardly and unrelenting, Cyril’s previous disorderly conduct suddenly switches into a touching blind forgiveness: the child’s ability for unconditional love in face of such bleakness replenishes at this point the screen with that tenderness and hope necessary to bear an otherwise hopeless scenario.

Cyril’s life takes on a gradual turn when a hairdresser (Cécile de France) commits to foster him. An uneasy relationship unfolds between the two, initiating them to a path of self-discovery: if she learns how much love she is capable of by fighting against all odds for Cyril’s goodness to emerge, he learns to take responsibility for his own happiness and to channel his hostile energy into the construction of a life where genuine care is a definite possibility.

Abstaining from the conclusions of the films it loosely shares aspects with, De Sica’s BICYCLE THIEVES and Truffaut’s THE 400 BLOWS, THE KID WITH THE BIKE neither opens to a rejuvenated love between father and son, nor to the deserted child’s uncertain fate. The radiant summer light and the prosperous outdoor landscape of the film embrace Cyril’s rebellious search for a new identity with a warmth seldom encountered in the group of the other ‘Dardenne’s children’ – one which will not fail to charm the audience, also thanks to the protagonists’ outstanding performances.