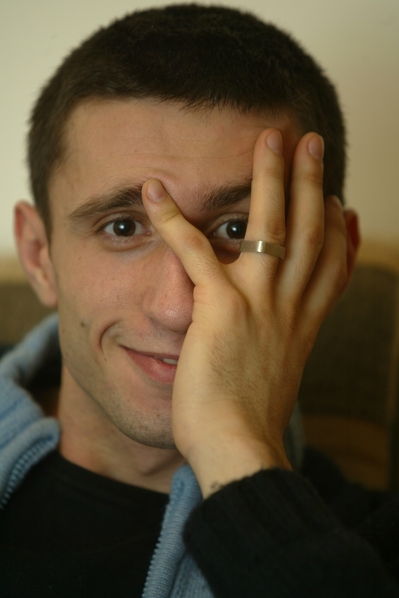 “This ignorance of theirs serves me well,” says Dragoş Bucur while he carefully studies the label of the Indian beer we ordered. The ignorance he refers to is the stereotyping of any East-European as being some variant of Russians. “What is beyond, let’s say, Budapest, is Russian,” he goes on. He is telling me this in an Indian restaurant around Aldgate, having just finished some preliminary rehearsal for his new role. It is partly due to this ignorance that Bucur, a Romanian actor, has landed an important role in ITV’s upcoming mini-series about the Titanic. He plays a character based on the real-life figure of Peter Piatkow, also known as Peter the Painter, a mysterious Latvian who lived in London around that time, and who might or might not have been a revolutionary, or anarchist.

“If you were to analyze the chances to get into a film like this, without an agent, without contacts, without another big movie on your resume, they are 0.000…”

When he is telling me this, the cast list had just been released a few hours prior by ITV, and filming is still weeks away; but this is not the first time the type-casting proved useful. He has a short part as a Chechen in Dennis Gansel’s German film IN THE YEAR OF THE DOG,  another short role in Francis Ford Coppola’s YOUTH WITHOUT YOUTH and recently he was part of the main supporting cast members in Peter Weir’s THE WAY BACK, another film based on a true story, about several convicts escaping from a Siberian Gulag during World War II.

To claim, though, that his landing of these roles is only because he sounds close enough to a Russian would be just another sign of ignorance. Bucur has starred in several highly acclaimed Romanian movies which have garnered prizes on the festival circuit, including the main role in 2009’s “Police, Adjective”, which got director Corneliu Porumboiu the FIRESCI Prize and the Un Certain Regard Jury Prize at Cannes. And in 2010 he received the Shooting Stars Award at the Berlin International Film Festival. He has slowly but surely made a name for himself nationally and internationally.

Who knows if all his talent would have gotten him out of Romania without that e-mail. But as things are now, he is one of the three most prolific Romanian actors…

Bucur, however, has a more pragmatic view on things. “I am a pretty lucky guy, you know? If you were to analyze the chances to get into a film like this, without an agent, without contacts, without another big English or American movie on your resume, they are 0.000….”. He received an e-mail from a friend in London telling him about THE WAY BACK, he sent in his CV, and he was cast. “The truth is, I don’t think that if I hadn’t played in BOOGIE, STUFF AND DOUGH, THE PAPER WILL BE BLUE and so forth, anybody would have taken notice of me for this casting, but I don’t think anyone actually saw any of my work.” Who knows if all his talent would have gotten him out of Romania without that e-mail. But as things are now, he is one of the three most prolific Romanian actors who act in big international productions, next to Marcel Iureş (HART’S WAR) and Maia Morgenstern who played The Virgin Mary in Mel Gibson’s THE PASSION OF THE CHRIST.

“Romanian directors and audience have to make peace. They have to find a middle road, you know?”

Romanian cinema has been on the rise since 2000, with titles such as OCCIDENT, THE DEATH OF MR LĂZĂRESCU, THE PAPER WILL BE BLUE being extremely well received by critics world wide, the film 4 MONTHS, 3 WEEKS AND 2 DAYS even winning the Palm D’or in 2007. The problem is that these art-house titles are best known for their minimalist approach, with slow and long scenes focussed on dialogue, mundane details and little action, which didn’t help with their popularity with the general audience: “not only are they uncommercial, they do anything they can not to be liked by a general audience” Bucur thinks. And while there are a few films made for the box office, “those are awful, nothing to do with quality. Nothing. […] You can’t understand how some good actors can act that bad, or how somebody wrote something like that? Romanian directors and audience have to make peace. They have to find a middle road, you know?”.

“Maybe critics and audience should stop being that harsh. They all are. As soon as a less than good film comes out everybody is happy to comment on how bad it is. As soon as a good festival film comes out everybody rolls their eyes about how there are only festival titles coming out. I don’t know why they are so spiteful. Old directors dismiss young ones, young ones dismiss the old, nowadays young directors dismiss each other. Old actors say the young ones have no talent, the young ones say the old act theatre not movies. Everybody needs to see somebody else suffering.”

Romania does not have a studio system, and films are generally funded by the government, which gives directors creative freedom but also small budgets, which is how they sometimes defend their minimalistic approach. But considering that these films are festival favourites it is uncertain how hard directors try to find that middle road. “There is a trend. I don’t think it is nice me saying this, but I think they try to please festivals.” Considering the lack of commercial viability and the recent recession it is not hard to understand that cinema in Romania, as much as anywhere else in the world, is going through a rough patch; and people such as Bucur are forced to look outside, not just as professional progress, but because there are not many other options. His pragmatism comes again into play. Despite being one of the most talented young actors in Europe, he views himself as a professional actor, not an artist actor, and will not turn down roles because they are too small or not suited for him. This readiness to take up every opportunity and his chameleonic talent will probably take him far.

There is this niche and I can work outside the country. The Romanian market had very few offers these last two years. If I would not have had my international projects I do not know where I would have been.

I expressed optimism at the future of Romanian cinema, that although it might be in a dark patch right now, better days might yet come, he seemed not very convinced. “If things get better I will not hesitate to return, but for the moment I found a way to pay the bills and do what I like. I found this new market. There are few limits now. There is this niche and I can work outside the country. The Romanian market had very few offers these last two years. If I would not have had my international projects I do not know where I would have been. I can live anywhere and film in another country. When I go to the casting, they don’t need to know I don’t live in London. This reminds me. Last time I was in London, I went out with a friend to this Italian place. We were the last customers. I thought maybe they want to close, but my friend said that the waiters would start putting the chairs up, or, maybe they think we are Russian and are afraid not to bother us. And sure enough, as we left the waiter came to us and said “Nazdrovya, Nazdrovya”.”

So yes, it might not be pleasant to be stereotyped, but Dragoş Bucur is ever pragmatic, and makes the most of it. Their ignorance does serve him well. I left him with a short hand-shake in Embankment Station, remembering something he said. When asked once which one is his best role his answer was, “The next one. Always the next one.”