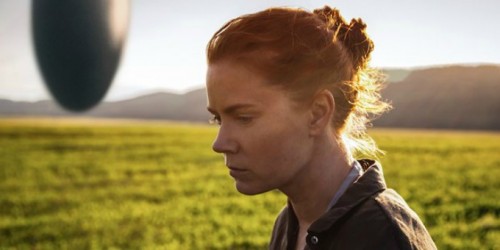 Having made his mark on the cartel genre with edgy thriller SICARIO, director Denis Villeneuve follows in the footsteps of Stanley Kubrick, Stephen Spielberg and Christopher Nolan, delivering a high-concept science fiction masterpiece. ARRIVAL takes the age old notion of mankind’s first contact and manages to find a unique spin, cementing its place among the greats.

First introduced as a mild mannered linguistics professor, still reeling from the loss of her teenage daughter, Louise Banks (Amy Adams in a career defining turn) first hears of the twelve alien crafts, hovering at seemingly random points around the globe, in the most millennial way imaginable: via the twitter feeds of her students. As the news reporters ponder the meaning of this arrival, Louise is approached by a sour faced military man, Colonel Weber (Forest Whitaker), and whisked off to the nearest landing site to have a close encounter with the mysterious extra-terrestrials.

These early scenes subtly capture the intense panic that surrounds such a world shaking event. Whether it be Louise witnessing a car crash in the parking lot of her university, both parties so desperate to get home that neither one is looking where they are going, or the dozens of soldiers erecting a camp near the UFO site with the combined efficiency of ants carrying a particularly big leaf home, these small details set the stage for later events, mirroring some of the major themes drawn from the film’s conclusion.

Making sure that the film doesn’t lack for wry smiles and sarcastic comments, Jeremy “Hawkeye” Renner trades his bow and arrow for a clipboard as mathematics expert Ian Donnelly. Together, he and Louise are shepherded through the military encampment, fitted out in comically oversized hazmat suits, and taken to the towering obelisk with an entourage of gun toting soldiers and a truck full of technology. The design of alien space ships is a harsh tightrope that filmmakers choose to walk: on the one hand it needs to be new and impressive enough to generate a factor of awe, while on the other it needs to be relatable enough so as to seem realistic and avoid absurdity. Villeneuve and production designer Patrice Vermette stylishly circumvent this through simplicity, deciding on sleek ovals made of black stone that hover silently in place.

ARRIVAL reinforces time and again the importance of communication, and the dangers that it can impose if done poorly.

Humanity’s attempts to access the ship offer a fantastic contrast. As each vessel sits 28 feet above ground, the team must use a scissor lift to access a small shaft on its underside. Some way up the tunnel, gravity shifts, forcing the team to make a literal leap of faith from the relative safety of the lift into the unknown. This small shift in perception, turning the world sideways, helps to make the interactions with the aliens feel all the more surreal and isolated. Rather than following Spielberg’s method of musical communication, Villeneuve’s squid-like aliens, dubbed ‘Heptapods’, excrete a smoky ink substance from their tentacles that form complex cryptographs, the nature of which allow the reader to know the end of a sentence just as they start reading it. Echoing one of the key themes of the film, this phenomenon plays with the idea that perception can be tricky, especially when it comes to interpretation of something you don’t understand.

The deconstruction and analysis of the Heptapod symbols takes up a surprisingly large chunk of screen time – a weighty risk that pays off thanks to the unyielding attention to detail in creating a full alien language and the subtle yet powerful performance of Amy Adams – and forms the basis of most of the film’s drama. In constant contact with the other landing sites, primarily in focus are those in China and Russia, Colonel Weber and typical grouchy CIA agent Halpern (Michael Stuhlbarg) put the pressure on Louise and Ian to figure out why the aliens are on Earth, all before China get too trigger happy with their own hovering vessel. While it’s a little clichéd and western-centric to derive story from China and Russia being unpredictable warmongers, the undercurrents of paranoia and fear that spur the actions of most characters throughout the film transcend nationalities, offering a commentary on humankind as a whole.

Geopolitics aside, ARRIVAL reinforces time and again the importance of communication, and the dangers that it can impose if done poorly. Ian exemplifies this ideal in his naming of the two Heptapods that he and Louise deal with. After pondering for a moment, he suggests that they name the two of them Abbott and Costello after the comedian duo most famous for their skit “Who’s on first?” which played on the nature of miscommunication and the duality of meaning. Right down to what appear to be small, throwaway lines like this, every particle that makes up the film is representing the key themes, with not a single moment wasted. The result is a film that, while slow paced, never drags, and carries a nuanced tension that is wrangled from the simplest of scenes, courtesy of the stellar performances of its leading cast.

As a protagonist, Louise is an incredibly complex and motivated character. While it would have been easy for a lesser actor to overdo certain emotional scenes and ruin them, Amy Adams carries them. Be it anguish at the loss of her daughter or frustration with a military hierarchy who refuse to listen to reason, each response is raw and realistic, and makes her endeavour to communicate with the aliens that much more poignant. After a few years bearing the quiver of Hawkeye in the Marvel Universe, Jeremy Renner reforms to a more serious role with ease, and while it appears at first glance that his flirtatious relationship with Louise is shoehorned and unnecessary, even that filters in to the main story in a meaningful way, while presenting one of the most poignant and heart wrenching questions in all of modern sci-fi.

ARRIVAL is a deeply thoughtful film that plays on the failings of humankind to deliver a rich, tension fuelled tale, all building towards an incredibly simple yet mind-bending conclusion. The emotional core helps keep the characters engaging throughout, overall resulting in an intensely satisfying story that raises many high-minded questions regarding whether or not humanity is even ready to make contact in the first place.