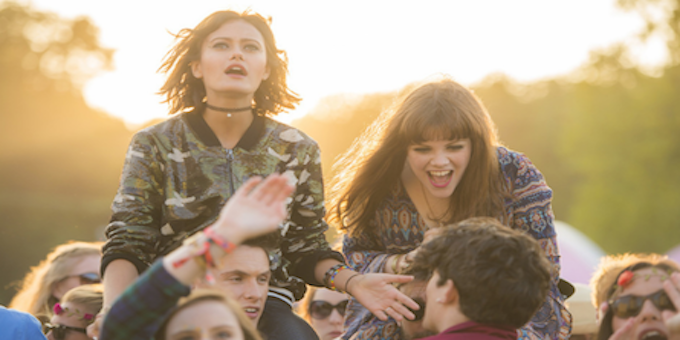 A world premiere at the Edinburgh International Film Festival, ACCESS ALL AREAS bursts with energy and life, at times pumping with bright scenes of large crowds and sweeping music festival landscapes – but then is able to seamlessly jump into a corner of that crowd, to where four friends are going through an intimate, small and intense situation that we all know about or remember from our youth.

Village life isn’t all mundane and dull. Heath (Edward Bluemel) is on probation, holding down two jobs and looking after his mother. Mia (Ella Purnell) is grounded by her overly-restrictive father because she got in trouble with the police. With their two friends, Leon and Natalie, they break out of the confines of real life to go to the Isle of Sound music festival, closely followed by their parents.

Vibrant and full of energy, the film is both a humorous romp and an exploration of the meaningful interactions we go through in our youth. It is a film where there is little need to make sense of all that takes place, much like a music festival itself, but one must simply enjoy the fantastic performances, a great soundtrack, the pulsating festival setting and some heartfelt, tender and comical moments along the way.

… much like a music festival itself, one must simply enjoy the fantastic performances, a great soundtrack, the pulsating festival setting and some heartfelt, tender and comical moments…

All of the characters feel like they were alive before you started watching the film; very little back-story, with only glimpses of who they are and where they come from emotionally – giving them a mysterious and life-like quality, as if they are real people you might meet at a music festival. The festival itself – filmed entirely at Bestival on the Isle of Wight – takes on the role of a character; a living thing in which Heath, Mia, Leon, Natalie – and even their parents – become immersed, and from which they learn more about themselves. Indeed, the festival is really the journey that they are all a part, finding themselves and each other within it. There is an abstract quality to the festival, with oracles passing on profound advice, floating dancers in the sky and washed-up rock stars living in caravans in the woods. It can all feel a little over-dramatic if you read too much into it. However, the film grounds this quality by not taking itself too seriously and these moments actually provide some of the best humour. Indeed, there are some very amusing moments – can you imagine dropping your phone into a music festival toilet?

The filming is as colourful as the music; each frame seems saturated with bright lights, fireworks, spinning beams and neon signs…

The soundtrack, as you might imagine, beautifully ties together the festival backdrops and the characters with their emotions. The filming is as colourful as the music; each frame seems saturated with bright lights, fireworks, spinning beams and neon signs. In this way, ACCESS ALL AREAS successfully catches that youthful, eternal atmosphere of a music festival: as if nothing is more important than the moment at hand, the friends you are with, and the drama we look back on with a laugh.