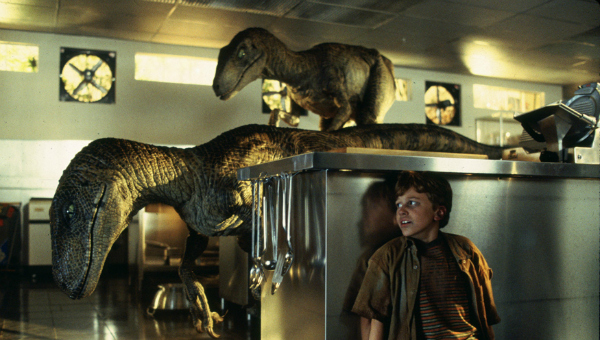 It is quite possible that Steven Spielberg’s JURASSIC PARK was my first film love. Having made three separate sets of relatives take me to the PG feature when it was first released would certainly indicate it as such. I’m too young for STAR WARS or even Indiana Jones, and too old for LORD OF THE RINGS. For me at the time, this was the movies.

Even today, I still hold a fondness for this brilliant example of blockbuster movie making. The craft that went in to JURASSIC PARK is apparent in the fact that the special effects (a combination of CGI and animatronics) of this 1993 release, almost a fossil itself by now, still outshine many modern effects blockbusters. However, as intrinsic as this is, it is the atmosphere of dread and suspense that allows a fear of velociraptor attack to persist to this day.

Their off-screen malevolence haunts every frame until their actual appearance …

Even if the dank gloom of the park’s chaotic disintegration is far off at the outset, an ingrained fear is instilled at an early stage. As a young child, watching Sam Neill slowly draw a fossilised raptor claw millimetres above an obnoxious child’s belly immediately sets the creatures up as an animalistic poltergeist. Their off-screen malevolence haunts every frame until their actual appearance, at which point the full horror of their swift and amoral nature is fully realised. Alongside the T-Rex teasing, it’s almost a masterclass in monster horror slipped in alongside a family sci-fi – which is an odd enough subgenre in itself.

When that glass of water starts to ripple, their dread and anticipation builds with your own.

The finer points of Michael Crichton’s sci-fi plot may be absent, but none of that would have delivered the iconic scenes that have lingered in the collective cinema consciousness for nearly 20 years. Although the characters hardly have Shakespearean depth, the myriad range of personalities is relatable enough to mean that we care when they are faced with a savage velociraptor death, or cower beneath a T-Rex. When that glass of water starts to ripple, their dread and anticipation builds with your own.

In the years I have spent watching films since, many have surpassed the spectacle of JURASSIC PARK in my mind as superior pieces of work. Few, however, have persisted in awakening my inner 6-year-old to the possibilities and worlds that can be realised on that giant silver screen.