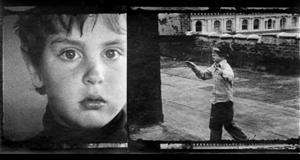 Photographer, film maker and blogger Danny Lyon was BORN TO FILM, and this is the title of his legacy cum genealogical tribute.  Lyon courts immortality with a studied, choreographed and yet engagingly honest record of his own son’s boyhood, intercut with stills from his father Ernst’s photograph album.  TWO FATHERS follows Danny’s precocious son to adulthood.  The third feature, MURDERERS, visits three states; New York, Arkansas, and New Mexico, featuring sparse interviews with people who have ended the lives of others.  These murderers present as normal people.  Are they no different to us, but for a fluke in circumstance?  If you beat someone until they fall into a coma, and then they die, did you kill them?  Can a pre-meditated act of violence really be whitewashed?

Danny Lyon shoots the breeze – an ill wind – with these persistently normal citizens, these so-called “monsters” who look like nothing more than accountants and fishermen, and presents them quite plainly, so that we can draw our own conclusions.  His “essay films” are more practice than preaching, and his bare honesty credits the viewer with independent thought.  Many of these killers’ death sentences have been promoted to “life without parole”.  But is there really any difference?  Danny Lyon believes that his country is “quickly going down the sh*t hole of history”, and when he picks up his camera for he would rather show than tell – whether celebrating the joy of fatherhood or exposing the mundanity of corruption – and we should admire him for that.