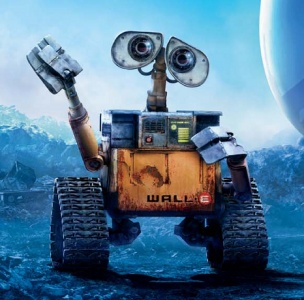 I could argue that WALL-E is cuter, and that Huey, Dewey and Louie face a rather more unpleasant fate; stuck forever in a dome full of fluffy bunnies with no natural predators- it’ll be a space-age Watership Down before you know it. But aside from your plastic pals that are fun to be with, there is a deeper thread that joins the two films.

Silent Running is a surprisingly dark movie, much darker than you probably remember. Cute robots and fluffy bunnies aside, right from the start of the film Lowell is clearly not the most well-balanced hippy, and Bruce Dern does an excellent job of looking twitchy and desperate throughout. There’s a pleasantly dirty realism to the look of the ships which serves to add to the sense of claustrophobia, and you know that when we do finally make it into the outer solar system, it probably will be all jumpsuits and wires hanging from the ceiling. Silent Running doesn’t shy away from the potential bleakness of our future, and even seems to take a certain amount of glee in pointing out what a big bunch of jerks we all turn out to be. 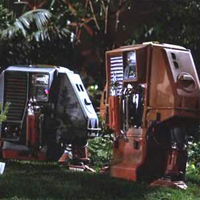 WALL-E might take a lighter approach to the subject of environmental disaster, but at the heart of it is the same question: can we still be ourselves if we are cut off from the natural world? Silent Running gives us an answer as cold as space itself, a tiny slither of hope hidden within if you look very carefully (and don’t think too closely about the space-rabbits) whereas WALL-E tells us that we’ll get back on track eventually, even if it has to be our plastic pals who get us there.

If WALL-E and Silent running are light and dark sides of the same coin, perhaps the best way to watch them would be one after the other. That way you can pretend that even if the human race turned into giant wobbling lazy-bums after blowing up the last of our plants and animals, cute robots will come to the rescue one day.