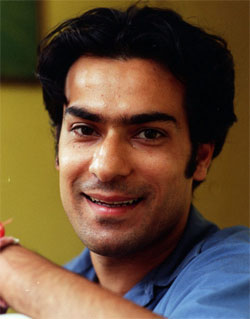 MK: I am sitting here with Mister Deepak Verma. Am I saying it correctly?

Sorry, I’m not from England, so I wasn’t…

Well neither am I.

Fair enough. We just came out of a viewing of MUMBAI CHARLIE. This is your first directing feature…

This is my first directing film, I’ve directed a lot a theatre before. So when I wrote the film I had the idea, well it’s based on this real story of this community in India who worship Charlie Chaplin, it’s based on this doctor who loved Charlie Chaplin. When the Earthquake happened in 2001, he wanted to bring laughter to this community so he set up this Charlie circle, teaching people how to walk like Chaplin, how to find their inner moustache, which is kinda what the film is about. So I wanted to have a bit of a laugh at that with the film.

The short film is about that, about finding this business-man, who all he thinks about is business, making money, and he realizes that he not living his own life, his living his dad’s life, and when he meets this community, he finds his inner Charlie, that’s what the film is.

How did you first discover Chaplin?

Well I’ve watched Chaplin for years, but I think when I found this article one day on the Tube about a community in India, where they celebrate Chaplin’s birthday every year, I’ve obviously compounded all that experience as much as I knew, and I realized that the guy was very much like a god of film, I mean a lot of what he did…now we don’t really realize that it was Chaplin that create it. The comedy. I mean he’s universal, and universal comedy is a bit like gold dust. Cause nowadays you can watch a film and maybe some people like it and some people don’t, at the time, everyone loved Chaplin. Everyone. I just came back from Kerry where they did the Charlie Chaplin Comedy Film Festival, where I had this film as well, and they absolutely loved it. And you really realize how much love there is for Chaplin still. And Chaplin’s son Christopher did some of the music. The estate helped us, and we used THE GREAT DICTATOR speech, which is just beautiful.

I’ve been a huge Chaplin fan for a few years now, and even though I hadn’t seen any of his films for quite a while, watching your movie now evoked those emotions of…magic.

Well yeah. It’s magical. He really talks to you. You do a little [wiggles his upper lip in classical Chaplin fashion] and you look at the camera, and…there’s a bit of Charlie in everyone. And that’s what the film’s about. About finding that. Cause I think we’re living in a very…erm, the speech that we use from THE GREAT DICTATOR, which is like: we found speed, but we’ve lost the way. We’ve lost the way. Everything’s fast, everything’s quick. We’ve lost the moment. And it’s about finding the moment, which is what all of Buddhism, all of Yoga, all about any form of meditation, spirituality is about, about being in the moment, and that’s what he is. If you look at Chaplin, he is in that moment, right there! That’s all that matters.

One thing said about Chaplin is, that he gave a voice to the impoverished, to the people living in the Depression, do you think that your film, which is set in India gives a voice to…

Well I think that was the point, I mean obviously he was brought up from a poor background, he was in the workhouse, his mum was ill and poor and all of that, but inside him he had this journey that he had to make. And when he made films later on he always referred to his youth, the tough times that he had. A lot of his films…THE KID I think is great because in a way the Kid is him, some of it, that character, the boy, the little boy. 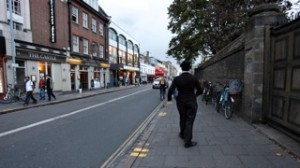 And also, I’m from India, I was born in India, and we’re from a quite, well-to-do family, but you’re still on the streets, you’re still ducking and diving, so I wanted to really use that, just to be in India, to work in a slum, the people in the slum, and just kind of get to know them. It’s just a pleasure and a privilege really, and quite moving for me is that, while working, this time they really treated me like an Indian, cause usually they treat me like a tourist, white man, cause no matter how good my Hindi is, it’s still got a little accent.

You said Charlie found a bit of himself in the Kid, do you think that in this film there is a part of you in the main character?

Absolutely, I mean I think when…well there’s a doctor character who teaches everyone how to be Chaplin. The character of the Doctor is very much me, he’s somebody who wants to change the World, he’s got his own idea of the World, that people don’t necessarily understand what he’s talking about half the time, but some of the time they do, and when it works it works, when it works you see what he’s talking about, you see what the message is. And his message is: Follow your truth, follow your bliss. Which is kind of what I’ve always done, you know, follow the truth, follow the art, do what you really want to do, not what other people brainwash you to do. And that’s what the film is really about.

Chaplin is universal, but he is a Western creation, and in the film we have him recreated by someone in the East. Now in 1998 you founded Pukkanasha Films, the productions of which combining cultures, cultural entities…

Well, yeah, I think I would say t 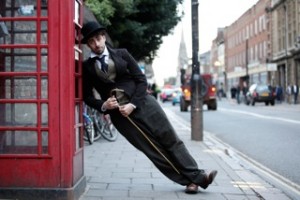 hat I want to tell stories which are universally appealing, whether they’re English, American, Indian, whatever. Obviously the first couple of projects that I want to do have got that cultural context, but, we’re looking at a Spanish project, we’ve got an American project, and so, I think to set out to do a diverse project is not the way I work, I want to a project where the characters have a great and amazing journey which appeals and speaks to everyone, and so there’s a story. I believe there’s structures in filmmaking, there’s designs, and you go to do this and you got to do that, but I think with MUMBAI CHARLIE some people watch it and think “What is that?”, it’s a bit strange, it’s a bit magical, and the aim is a bit “Alice In Wonderland”. It’s a bit “Alice in Wonderland” inspired, when he drinks the medicine from the doctor, who’s a bit like the Mad Hatter, so all of those influences are there.

What do you think about how different cultures are represented by the English media: films, tv. Obviously, you’ve been on “Eastenders”, and you were amongst the first characters to bring cultural diversity. What do you…

I am very proud to be in that position, where the character was the first Asian/Indian character there, whom the people just saw as a character and just loved as a character, and not as some Indian guy. And that for me is very important, and I think it’s very wrong to just start being diverse, and I think that that’s where some of the Film Council, the ex-Film Council, and some of those organizations…you know, organized diversity does not work. It just doesn’t work, it’s a failure, and it doesn’t really say anything. It’s just ticking boxes, and employing people who…I don’t think people from certain minorities should get a leg up. If you’re good, you’re good, if you’re not good, you’re not good.

So I really believe it’s about the story, and this film was made with private money, and it is what it is, you know what I mean? I’m not ticking any boxes, I’m just doing what I want to do. To me that’s really, really important, because I think that’s where this companies get it wrong, where an x amount of money will go to black filmmakers, and x amount will go to Asians, I think that’s wrong, I think it should go to the best filmmakers, and if none of them are black, fine, and none of them are Asian, fine, if all of them are Asian, great. That’s what I think, which people won’t like but.

Do you think your cultural background has hindered you from finding any work in England?

No, I think if it’s hindered me it’s something that has to do with what I do as a person, and if anything has propelled me, it’s what I’m doing. I have this saying: “it’s not where you’re from, it’s where you’re at.” And if where you’re at is telling you to seek stories, than people will follow you. But if you keep barking about how “I’m Asian, and he doesn’t earn enough money…” But that’s not the way to…I think it’s rather about what you want. At the end of the day it all comes down to script, and character and obviously idea, that’s all it’s about, it’s about nothing else. When form-filling takes over that, which a lot of times it does, a lot of film-makers do get financing because they just know how to fill in forms and they’re from a particular cultural background. That does happen, it does. People will deny it, but it happens. I think that’s just gonna get nowhere. You might take the forms and send them to DCMS and say we have that many blacks or Asians, and it doesn’t do anything for me. I think it is the same for theatre, I think it’s just about what is interesting.

You are now preparing a musical version of “Wuthering Heights”, what other projects do you have lined up theatre-wise?

WUTHERING HEIGHTS is going to be a musical with a big West-End angle, that’s the idea; MUMBAI CHARLIE as a feature, people love the film, so, see how that goes. And I’m working on JANE EYRE as a theatre show as well, using Calcutta as a place. ‘Cause JANE EYRE is about a girl who is raised in a convent, and kind of finds herself, I think most things I write are about persons finding themselves. So I am working with some actors I know. What I like is to have the idea, get the actors, do the workshops and I am quite lucky who you pay them and they do it. You just don’t wait around for subsidies, just get one with it. There’s always ways to do things.

Until you get started on the feature length version, what is in the plan for “Mumbai Charlie” now?

We’re going to festivals. It’s playing in L.A, we’re playing at AFM I hope, where we are doing an independent screening, period. And, it’s won an award at the Honolulu Film Awards, which is an interesting place to win an award, it’s going to Atlanta Shorts Fest, it’s going to various festivals. Where take it around the festivals, and then we can see where we stand here.

One thought on “Deepak Verma”