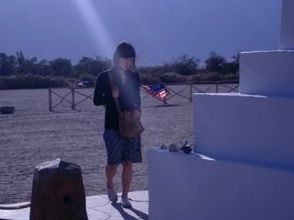 In Mike Ott’s LiTTLEROCK, two road-tripping siblings from Japan, Atsuko (Atsuko Okatsuka, who co-wrote the film with Ott) and her brother, Rintaro (Rintaro Sawamoto), find themselves stranded when their rental car breaks down in a small California town. They attend a party in the motel room next to theirs, forming tenuous, sparsely articulated connections with other partygoers (Rintaro speaks little English and Atsuko none at all). The siblings separate when Atsuko refuses to continue the journey. Remaining in Littlerock, she stays with Cory (Cory Zacharia), a boy from the party, and works at his family’s Mexican restaurant.

Atsuko is an explorer with something invested in the idea of America. Unable to communicate directly with the people around her, she nevertheless seeks experiences with them. She writes letters to her father in Japan, fabricating details of the trip to conceal her off-road adventures. She speaks Japanese to Francisco, the cook at Cory’s father’s restaurant, and he responds in Spanish: their untranslated exchanges contain some of the film’s most eloquent moments. Unlike Francisco, who is the target of racism, Atsuko is an attractive and interesting foreigner.

tt demonstrates a painful human truth: it is possible to simultaneously connect with and yet remain unable to reach another human being.

All the characters in LiTTLEROCK project their own narratives onto events, their ideas and emotions onto each other, prevented by the language barrier from having a more open cultural exchange. Isolated while in the same room with one another, there is a warm vulnerability in their persistent attempts to connect, which proves by turns both foolish and poignant. They slip through each other’s grasp: Cory likes Atsuko, but she becomes involved with another boy, Jordan. Ott demonstrates a painful human truth: it is possible to simultaneously connect with and yet remain unable to reach another human being.

When Atsuko and Rintaro arrive at their final destination, we understand better Atsuko’s interest in an American life. Ott has saved this moment for us, and it is a revelation that broadens the impact of the film. A final phone call between Atsuko and Cory is tense and bittersweet, full of goodwill lost in translation as they fail to understand each other one last time. At its heart, LiTTLEROCK is about diverted histories, large and small, pieced together by imagination and longing.