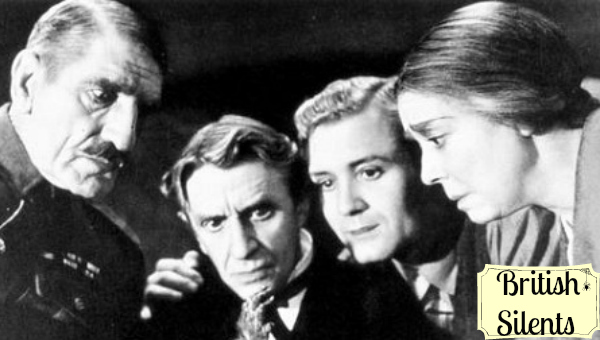 On the 20th April, British Silents and BFI presented an all day event at London’s Cinema Museum: a programme of London-related film including  THE YELLOW CLAW, full  surviving fragments of COCAINE, MONKEY’S PAW and rare shorts from other collections; as well as the 21st century premiere of the 1920 HOBSON’S CHOICE. Keith Braithwaite describes his experience of this culturally fascinating and authentically uncomfortable  event.

Pace THE ARTIST, silent films are old films. They come from just either side of the First World War, I guess. Seeing them lurch around on the big screen is as if the old pictures of their grandparents that your grandparents had in a mouldy handbag in the back of a cupboard when you were little suddenly came to life, like one of the more disturbing episodes of Sapphire and Steel. Murky, low-contrast film stock and too many characters dressed in black suits make for a headachey combination.

… someone has been found dead? Lock up the nearest servant until the police get around to him …

Maybe to describe them as “lurching” is unfair. In the films that I saw shown at the Cinema Museum this Saturday, the location footage (on a train, in the street) has that slightly comical, undercranked look, but footage from the studio is as smooth as 24fps gets. Yes, the camera is locked down: no panning, no tracking, no zoom. Yes, the editing is sloppy. Yes, the sets have a lot of one-point perspective and follow stage conventions with receding layers of flats. But otherwise much of this material is recognisably “filmic”, which perhaps tells us something interesting about how quickly the idioms of cinematic story telling were established.

Some of the actors seem not to quite have bought into this, though, and maybe some directors too. The over-acting cutaway—long, long takes of some character putting all their energy into a mime of “amazement” or “horror” is deployed more often than necessary. Then again, it’s fascinating how few title cards a 40 minute feature actually needs to tell a coherent story. The actors are clearly gabbling away at each other in each scene but only the most obscure bits of exposition really need a card. Of course, having characters send to one-another telegrams explaining the plot which may be held up to the camera for us in the audience to read helps too, but so long as the story involves people going to places and doing things there, rather than sitting around talking, it all works extremely well.

These were British films and they offer a startling insight into British culture of the time: someone has been found dead? Lock up the nearest servant until the police get around to him (gentlefolk will receive a gentle questioning in the drawing room); a minor character is not British? No need to name them. British characters, of course, are introduced by a title card, with the actor’s credit. The privilege drips off these documents.

… a ramshackle hoarder’s paradise of miscellaneous tat and junk …

The Cinema Museum itself is a ramshackle hoarder’s paradise of miscellaneous tat and junk, dignified only by having been at some point part of the fabric of a cinema. The museum is housed in what was the administration block of the old Lambeth Workhouse. Charlie Chaplin and his mother lived in that institution briefly, and so a lot of attention is paid to him. Otherwise, it’s a bit of a puzzle what the thing is for. Maybe the good stuff is in all the rooms with signs on the door saying “no entrance, this means you”. This Saturday was the first properly sunny Saturday we’ve had this year in this part of the world, and far too nice to spend sitting in an authentically uncomfortable old cinema seat watching authentically eye-straining old films. So after the morning session I bunked off to sit in the sun in a nearby park. I love film, as art and as entertainment, and as history, but I don’t love the experience of watching a film in primitive surroundings enough to want to embark on some sort of authentically unpleasant re-enactment of going to see a movie in 1914.

One last thing: the films were accompanied by live music and that can’t have been easy on the performers, in the dark, trying to keep in sync with the show. They did an excellent job.

On the 4th May, the BSFF are guests of the glorious Aldeburgh Cinema for an all-dayer with a coastal theme, including the ‘east coast’ films of Manning Haynes and Lydia Hayward based on the W. W. Jacobs stories, a programme of Lifeboat films and others. The fabulous Dodge Brothers will be playing Beggars of Life on the 5th for those who want to make a weekend of it!