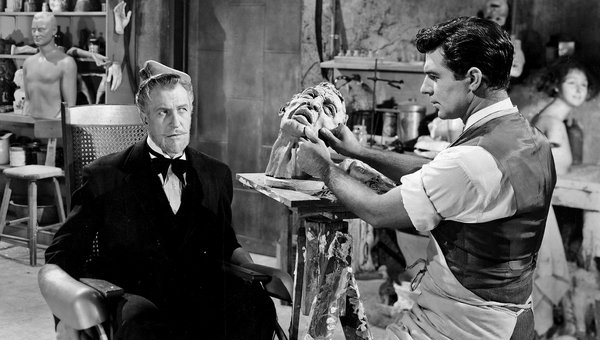 For 3-D movies, it is clear that the third dimension exists in our perception; our brain interprets the images projected onto the flat screen into a 3D image. There’s no need to make it obvious with scenes designed solely to show off the 3D effect, as this can detract from the story the film is trying to tell. Horror operates in a similar way. Horror is only truly effective when it plays with our psychology and fully engages our minds. Things are much less likely scare when they are too apparent and too visible. The space of imagination is better to be left wild and free.

The classic HOUSE OF WAX (1953) still manages to grip the viewer and give them the chills better than many modern horror attempts. Originally the film was released as a 3D production. In fact, it was the first colour 3D film by a major studio. The film was a remake of MYSTERY OF THE WAX MUSEUM (1933) starring Vincent Price as Professor Henry Jarrod, with extra three-dimensional effects added to entice a new audience. Its popularity was such that it was regularly re-released in cinemas during the 1970s and 1980s. Warner Brothers remade the film again in 2005, under the same title; but as with so many recent Hollywood remakes, they failed to recapture the magic of the source material, and the 1950s classic remains the definitive version.

The use of real elements and objects – this is what wakes our senses, and triggers our imagination.

We see a few things in the classic HOUSE OF WAX that are hardly ever seen in contemporary horror films nowadays. Professor Henry Jarrod works as a sculpture artist, and he uses wax. All the props we see are real wax figures. The first scene of horror that the audience experiences is Professor Jarrod’s first museum being burnt down. It is a terrifying and vivid experience, seeing the lifelike human figures melting. Their faces get more and more rotten, until you cannot see their features. Later on, we learn that Professor Jarrod’s face is also burnt from the accident. Here, we begin to imagine the pain that Professor Jarrod suffered in the fire, combining with the images of the melting wax. The real horror always lies in the darkest space of human imagination.

In some contemporary horror films, a scene like the melting waxworks would probably be produced with CGI to save on budget. At times, however, the use of real sets, real props and materials, things that are solid and tangible and not constructed from binary digits, are crucial to horror films. The use of real elements and objects – this is what wakes our senses, and triggers our imagination. Horror should be sensed and felt in more ways than just being  seen. A lot of the Hollywood horror films we see nowadays only produce horror for the sake of shocking visual effect. It will be a unique experience to see this classic film on a big screen again, but do not expect it to be an AVATAR type of 3D. This is something far more classy and subtle.

HOUSE OF WAX  screens as part of the RETRO 3-D section of the Cambridge Film Festival at 1.30pm and 11.00pm on Friday 29th August.