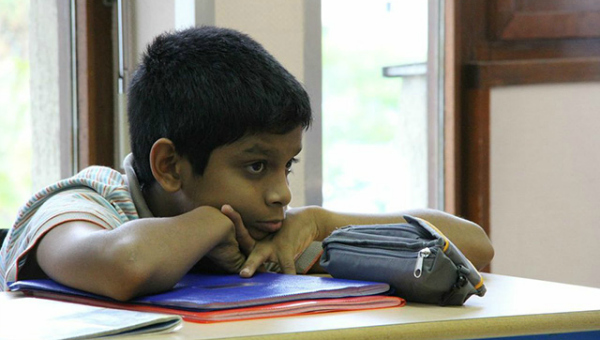 SCHOOL OF BABEL, Julie Bertuccelli’s consideration of multicultural Paris, is a simple and moving documentary which layers the personal stories of children newly-arrived in France. Although these children are from a wide variety of backgrounds, they are united in attending the same ‘Reception’ class: a specially-designed teaching group for second-language French speakers in their Junior High years. Charting both the individual progression of students and the welfare of immigrants in France more broadly, SCHOOL OF BABEL allows a candid and revealing insight into the complex pressures put on teachers, guardians and students alike by the uprooting of families.

Central to the film’s structure and emotive core is the careful integration of the class’s ever-patient and diplomatic teacher, Mme. Cervoni. By largely filming in a way that allows only Cervoni’s voice to be heard, rather than reveal her appearance regularly or delve into her own personal life, Cervoni remains a distant figure that garners respect. Bertuccelli ensures that the moments that demonstrate Cervoni’s vulnerability have maximum impact by virtue of their rarity. Furthermore, the gradual revelation of Cervoni’s role as part-mother, part-spiritual guide, part-crowd-controller and part-teacher becomes detached from her own emotive arc, and as a result, all the more impressive.

The sympathy and respect afforded to Cervoni over the course of the film is further bolstered by the dovetailing of classroom and individual scenes, emphasising the variety of battles faced on a daily basis by the leader of such a broad range of people. The culmination of her efforts over the course of the academic year is illustrated by a student-made short film. Again, Bertuccelli’s editing and camera work enriches the emotive potential of this project. These snapshots imbue the film with its overall sense of warmth, conjuring an overall picture of the children’s characterful nature and enormous potential despite their suffering.

It is this ability to pare down broad and thorny political issues to their human centres that allows the SCHOOL OF BABEL to be both affecting and informative. While each child contributes their own powerful story and identity to the overall narrative, it is the central focus on Cervoni’s task in hand that gives the film its integral structure, mimicking the vital role she plays in real life in guiding her class towards a brighter future. Bertuccelli has created a film that neither lingers too long on heart-wrenching stories, nor forces a moral message by skipping over individual narratives in order to point fingers of blame. Instead, Bertuccelli presents a well-woven and subtle film that relies solely on the stories of vulnerable humans rather than tricks or gimmicks to deliver its warm and intelligent thoughts.