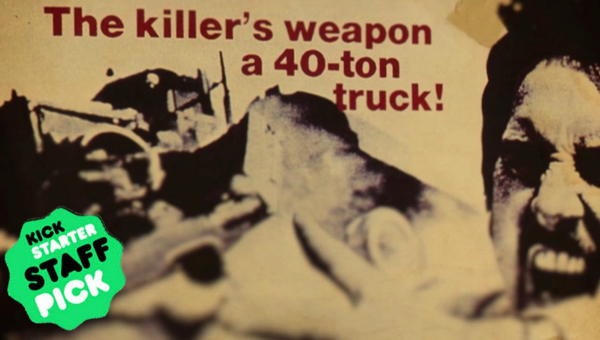 We spoke to Enric Folch, Gab and Luca Stifani and Roger Allen, some of the co-creators of THE DEVIL ON WHEELS: which, with a little luck from Kickstarter, will look at the enduring cult status of Steven Spielberg’s DUEL. The shoot will include a recreation of the route followed in the film, using replicas of the iconic Peterbilt 281 tanker and Plymouth Valiant – as well as interviews with celebrity fans of the film. Backers can enjoy all sorts of perks, from a papercraft model of the truck and car to an appearance in the actual documentary!

Enric Folch: Yes, and we have only 12 days to raise the rest. This is our second or third interview today – the last one was from Spain. People are reacting very well to [the project]. So we’ll keep our fingers crossed and keep working.

FG: For those who haven’t seen DUEL, it was made back in the 70s – it was a TV movie, and as you guys put it, it was from a rookie director at the time – Spielberg. But it has grown into this amazing and massive film with a huge cult following. What do you attribute its success to?

EF: That’s precisely why we’re making the documentary, to find out what are the key reasons. I mean, it’s a fact that many things happened in a unique way in DUEL, right? First, you’ve got these extremely talented people in the same place at the same time, and none of them were superstars – although Richard Matheson, the author, was a superstar writer. But the rest of the crew was extremely talented, and they really trusted this almost childish looking director. Spielberg was 24, but he looked like 20! So all his crew were inexperienced people, right? And for some reason, all of them were lucky enough to get a fantastic actor, perfect actor for what was the only human part of the film, Dennis Weaver; who was actually astonishing. And things worked perfectly.

We’ve spoken to people who watched the film when they were six and they’ll always remember it. That’s the magic of it.

Still, even being a good film, the fact that it was a TV film should have killed it just there, after one showing in America. But that didn’t happen. You know, it was first released in Europe, and then it was expanded to be released in Europe as a film. Then it was released in America, but that was in the 80s, so it’s the only Spielberg film that didn’t have full industry pushing behind it. It was the people who actually love the film, the only ones that kept the film alive, and that’s what we find which is magic. So there are many parts to this project, and one of them is the way the film was made, then how improbable it was that we would still be talking about it in 2015 – and then how its influence has expanded over the years. TDOW is about all this – how this little piece became something so big. As the crowdfunding campaign goes along, we’re getting to meet more and more people who are sharing their experiences with us. So we’re getting more material for the film.

FG: DUEL is an influential masterpiece of film, but aside from that, the iconic Peterbilt 281 tanker and Plymouth Valiant are irresistible to car and truck lovers. Is that dual appeal part of the secret to its huge following?

EF: It’s fun to see the film has created such a strong fandom along two different lines, but the fact is that Spielberg chose the Peterbilt tanker, which is one of the top trucks, so I think that had an influence. And still the film has sort of a nightmarish quality, with paranoia and an in depth human element that everyone can relate to, even young audiences now. I think it’s just this mix of talent, and telling the right story at the right time in the right way. Because it meant the beginning of Steven Spielberg.

FG: The documentary will include a step by step recreation of the route followed in DUEL, across Southern California. How faithful will this recreation be?

EF: In our documentary we’ll reproduce exactly the way the film was made. It’s really entertaining. I mean, they took so many risks. Spielberg shot the film in a way that he wasn’t allowed to do. For instance, the guy who was driving the tanker – he was the top stunt driver of those times in America, and he was a legend. He’s to blame for many of the good things that happen in the film! They got this special camera from the excellent film BULLITT, which is famous for its car chase and the camera was designed specially for that scene. That film was shot before DUEL and they were able to use that camera. So obviously, they couldn’t afford to have a camera made like that. So it seems like everything went the right way.

Spielberg designed the whole thing – they had this huge map drawn on the wall of his hotel and he set out all the camera positions all the way through the film. So they were shooting with five cameras, so they would shoot it one way and then go the other way – they had to go really, really quick. So they did it in ten days. We know exactly what he shot each day. We realise that if we are to make a film about DUEL, we should be DUEL experts somehow! So we’ve been researching very hard because we know we have to know this subject better than anybody. And I think we’re not doing bad in that respect. At least, we’re doing our best.

EF: Alfonso Cuaron mentioned it as one of the two films [which have most inspired him] – one of them was the Robert Bresson film A MAN ESCAPED and the other one was DUEL, because he was impressed by the minimalism of the way it portrayed survival; which is exactly what he did in GRAVITY. Today there are a lot of famous Steven Spielberg fans, but the DUEL fans are a very special race, and we know that Stephen King is quite a fan because he was a personal friend of Richard Matheson – in fact, he [and his son Joe] wrote a book called Throttle which is technically a sequel to DUEL. It’s been made into a comic book. We also know that Edgar Wright is a superfan of DUEL and we’re hoping to feature him in the documentary. Obviously we want to talk with Alfonso Cuaron, but we’re on the lookout for all DUEL fans. When someone has seen that film, they always remember it. People that we’ve interviewed, maybe they’ve watched the film when they were six and they’ll always remember it. That’s the magic of it.

FG: So will the documentary be as much about the fandom as it is about the film itself?

EF: There’s going to be fandom related stuff but at the end of the day, it’s a documentary about the power of film on people. It’s about the fascination, it’s as simple as that. It will go beyond a “making of” – there are many more things to say about how the film was made, and what happened right after the film. Right after DUEL, Spielberg directed two TV films which I’m sure you haven’t seen – and then he directed his first feature film for the cinema which you may have not seen because it wasn’t a success – it was called THE SUGARLAND EXPRESS. Then his first successful film was JAWS. So for some reason, DUEL had something really special and unique. So that’s what the story’s going to be about, and we’re going to see everything through the eyes of fans.

FG: Can you tell us about some of the cool Kickstarter rewards you’re offering?

EF: We’re offering all kinds of rewards, from the papercraft models of both vehicles from the film, which have been custom designed specially for us by a prolific paper artist [Ronaldo M.], to having your name in the titles. You can even appear in the film, ’cause we’re going to do a meeting with all fans in America. There’ll be new DUEL posters created by new artists – there’s a long list.

FG: TDOW won’t just be crowd funded but crowd created… you’ve said that fans who want to collaborate can join you on the road and participate via Whatsapp. How will this work?

Roger Allen: Yes, there’ll be an online group you can join to follow the whole process, so we’ll be keeping people informed every step of the way. That’ll include when we do the interviews with celebrity fans – we’ll be doing it live on Whatsapp.

EF: It’s the perfect moment to shoot the film, with fans connecting live with fans. Our guys know how to work quickly and efficiently, and we’ll be connected online. That never happened before in history.

FG: Have you managed to bag an interview with Spielberg yet?

RA: I’m not sure if we can comment on that! We plan to interview him after filming because there wouldn’t be any point doing it during the film. We want to ask the questions that arise during the making of the film.

EF: We are already learning already many things about the film that we didn’t know before we started. We are meeting new people, people are contacting us. So what we want to do is share everything we’ve learned with [Spielberg] and see if he’s aware of all the things that have expanded since that little film was made 40 years ago.

FG: How did you all meet – are there worldwide DUEL conventions?

Gab and Luca Stifani: We met Roger [Allen] first, in 2005. He came to London for an internship and we were put in touch with him. I remember when we came to live with him, the first movie that he showed us was [Enric’s film] TEMPUS FUGIT.

RA: I went to this film festival in Sweden, where Enric showed his film, and he won the documentary award so I went up to congratulate him.

G&LS: We watched this movie like 6 years ago and thought “Man, this guy’s fantastic, and Roger – he’s your friend? Unbelievable! I need to meet this guy one day”. And then six years later we’re working together.

EF: Preparing this, I was wondering what the best team would be. I had directors in Spain but then realised I had more crew here in London. Roger’s an expert in computers and producing – Bros are experts with camera, with editing or anything. I wanted a crew that was really connected with modern technology. So I offered the job to these guys and the guys in Spain, and everyone said “yes” from the very beginning. The more we investigate, the more attractive things come up – so we’re dying to make the film, to be honest.

2 thoughts on “The Devil On Wheels”