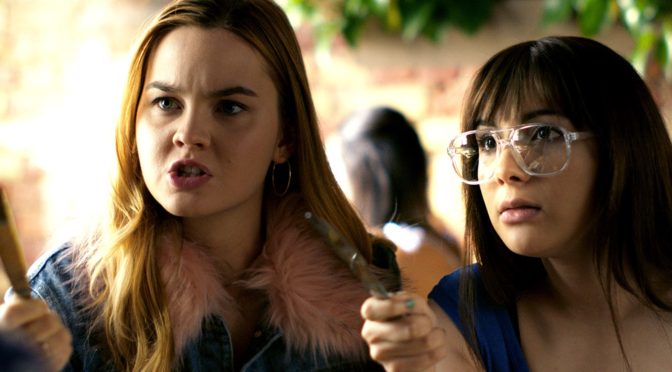 After splitting up with her high-school boyfriend of two years, April (Hannah Marks) is all set for a miserable summer before heading to college. That is until she meets kindred spirit Clara (Liana Liberato), who instantly becomes her new best friend. One problem, though – Clara is dating Nick, her ex (Dylan Sprouse).

Hot on the heels (or plimsolls) of Olivia Wilde’s critical darling BOOKSMART, the teen ‘womance’ seems to be somewhat in vogue. It’s refreshing, therefore, to see a film based around a platonic relationship between two young women in Benjamin Kasulke’s BANANA SPLIT. Yes, the framing device for the narrative is their mutual interest in the same man, and yes, drinks fly in the climax of the film as the two fight over him. Make no mistake, though, their friendship is where the story lies. Nick is an obstacle to overcome for their friendship to survive, rather than the objective of the story itself. Despite what any Bechdel test or equivalent may determine, this is an important distinction to make.

The chemistry between the two women is one of the film’s great strengths. The bond between them crackles with a pure, genuine quality. Attraction begins through a love of similar music, and quickly matures into something much deeper. Attraction may be an unusual term when describing a friendship, but comparisons to romance, and romantic films, cannot be avoided in BANANA SPLIT. There is categorically no physical interest between the two girls, although the unusual nature of their closeness is frequently inferred as homosexual, and some humour is made of this (interestingly, also between Nick and his best friend, perhaps reflecting a fear of amicable intimacy among this generation and also film in general). From meeting to forming a relationship which survives reservations and complicating outside factors, the story bears many of the hallmarks of romance, and is equally as compelling.

Crucially, the film is also very funny. April’s younger sister Agnes (Addison Riecke) steals the show in many scenes, as she conspires to lure a much older Nick from her sister. Attempting to control her two teenage daughters is April’s mum Susan (Jessica Hecht), operating her own unique brand of open and honest sexual education on the two girls – much to their chagrin. Then there is the unwilling co-conspirator in the girls’ secret friendship, stoner Ben (Luke Spencer Roberts) – Nick’s best friend – who also happens to fancy April. The humour is certainly reminiscent of modern teen comedy, but there is still a fresh and authentic edge to moments such as seeing two sisters scream profanity at one another over the dinner table, as well as the excellent deployment of social media interaction in the film.

Amusing, heartfelt, and with a premise that hasn’t been stamped into the dirt by countless films of its kind (yet) – this is a welcome addition to the pantheon of teen comedies, updated for generation Z.