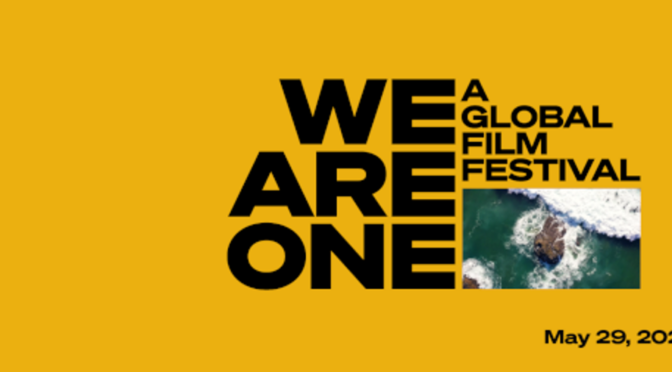 With the Covid-19 pandemic bringing the world to a grinding halt, it was inevitable that the film industry was going to be heavily impacted by this virus. Cinemas found their doors closing, distributors pivoting to digital releases, and festivals unable to roll-out the red carpets for the premieres of this year’s cohort of new films. In response to this, the first-ever mass co-curation project of multiple film festivals is to be exhibited online – the We Are One Global Film Festival. Why is this so monumental for the film industry? This 10-Day Digital Festival, which is being produced and organized by Tribeca Enterprises and YouTube, will feature Programming from iconic institutes including Cannes Film Festival, Berlin International Film Festival, Venice Film Festival, BFI London Film Festival, and Sundance Film Festival to name just a few.

Tribeca Enterprises and YouTube announced today the programming slate for the online festival which will feature over 100 films co-curated by 21 prolific festivals. These stem from 35 countries, in addition to talks, VR content and musical performances. The aim of the festival is to elevate films that can unite audiences across the globe, with some of the most talented storytellers and curators during this critical time. To solidify this global partnership, the festival will run exclusively on YouTube May 29 – June 7 at YouTube.com/WeAreOne. This is a bold move from some of the world leaders of the film festival circuit, as these events usually take place solely on the ground for the industry and public, however, this heavy global publicity will allow the event to reach audiences who may be unaware that their local festivals are actually accessible to the public. Here at TAKE ONE, many of our article and interview coverage stems from film festivals both in the UK, Europe and further afield, so we will keep up our reporting of the virtual festival, and begin to understand if this event will have an impact on future exhibitions, and alter the film landscape for better or worse.

These screenings are stated to give audiences an opportunity to experience different cultures through an artistic lens – each official selection was handpicked for inclusion to highlight the singularities of each participating festival, while also providing a voice to filmmakers on a global stage. This is very much a shift from the current premiere standard that the industry sets out for the coming year. Normally, each film festival has their own structure guide, with ‘In Competition’ being laid out as the festival’s main event, and the additional strands highlighting something specific such as genre, high-profile films, jury recognitions for artistry or debut selections. Many prolific festivals require that the films submitted to the festival will have their international or national premiere with the festival, which is what draws in the various sales and distribution agents of the industry to discuss marketing and acquisitions across different territories. For the We Are One festival, many of these titles will have significant debuts at the festival, including 13 world premieres, 31 online premieres, and five international online premieres.

Tribeca Enterprises and Tribeca Film Festival Co-Founder and CEO Jane Rosenthal have said: “Together, we were able to curate a compelling slate of programming that succinctly reflects the subtle variations in style that make each festival so special. We Are One: A Global Film Festival will offer audiences an opportunity to not only celebrate the art of film but the unique qualities that make each story we watch so memorable.” The mentioned highlights include the Online Premiere of the documentary RICKY POWELL: THE INDIVIDUALIST featuring Natasha Lyonne and LL Cool J, and Global Premiere of Third Eye Blind’s MOTORCYCLE DRIVE BY and the world premiere of Iron Hammer, a compelling documentary feature directed by Joan Chen about trailblazing legendary Chinese Olympic volleyball star Jenny Lang Ping.

“We Are One: A Global Film Festival will offer audiences an opportunity to not only celebrate the art of film but the unique qualities that make each story we watch so memorable.”

The BFI London Film Festival Director Tricia Tuttle has said “We wanted to focus on two things that have great power to unite people across the world – film and music. Here we present two silent films Shiraz and The Epic of Everest, restored by our colleagues at the BFI National Archive with richly evocative, newly commissioned scores from contemporary musicians – Anoushka Shankar and Simon Fisher Turner. These archive gems sit alongside a short film programme of emerging UK filmmakers who are busy now developing on the great promise of these works. We also present RUDEBOY, a documentary about the UK’s Trojan records, behind many 60s reggae, ska and rocksteady hits from Desmond Dekker to The Maytals. In these challenging times, there are many people struggling and We Are One is an opportunity for us to come together through our love of film, art and music to reach out and support each other.” Alongside RUDEBOY, the BFI London Film Festival has programmed the following titles for We Are One: F. Osten’s SHIRAZ: A ROMANCE OF INDIA (1928) and J.B.L. Noel’s THE EPIC OF EVEREST (1924). They have also curated the New UK Filmmakers – Short Film Program: Jörn Threlfall’s OVER (2015), Runyararo Mapfumo’s MASTERPIECE (2017) and Mark Jenkins’ VERTICAL SHAPES IN A HORIZONTAL LANDSCAPE (2018).

Another enticing aspect of this virtual festival is the specialist talks curated from both the archives and new discussions surrounding key moments in film history. Talks will feature Francis Ford Coppola with Steven Soderbergh, Song Kang-ho and Bong Joon-ho, Guillermo del Toro, Jane Campion and Claire Denis. 360 VR selections will feature Emmy-nominated documentary Traveling While Black and Atlas V, a sci-fi narrative starring Bill Skarsgard, as well as additional titles with notable talent including John Legend, Oprah Winfrey and Lupita Nyong’o. There will also be special musical performances, including a 30 minute DJ set by Questlove. Berlinale’s Director Duo Mariette Rissenbeek and Carlo Chatrian have also made a statement: “Cinema is not only a collective work but also a shared experience. In these times of social distancing, the spirit of cooperation and a sense of community is needed more than ever before. Therefore, we are happy to participate in the We Are One initiative. We wish all those wonderful artists that their audiences will be able to see their work on the big screen again soon.”

“We will keep up reporting of the virtual festival, and begin to understand if this event will have an impact on future exhibitions, and alter the film landscape for better or worse.”

This level of connectivity, creativity and cooperation of festival teams across the globes brings together the essence of collaboration, and donate a slice of their own festival’s identity into this collaborative project. The accessibility element during a time where many are confined to their homes, and relying on the online. The expenses of various different movie streaming sights, and renting from various distribution companies have been working despite the costs and allowed acquired films to reach their audiences, and it has exposed many people to new genres and international films. This festival will be observed carefully by the industry: some nervous about the potential of this new digital playing field, and others grateful for access to new films regardless. It will also be a challenging time for sales and marketing teams, having to schedule meetings around these screenings, and managing virtual video calls across different time zones will present a unique case for international hubs. It will also allow for collective virtual responses from films that include the public and press, and whether this will dilute the pool of commentary, or fuel the divide of love and hate for a film. But it is also crucial to remember that people will be able to give back through charity incentives, via donations to the World Health Organization (WHO), UNICEF, UNHCR, Save the Children, Doctors Without Borders, Leket Israel, GO Foundation and Give2Asia, among others. The full festival schedule is available at www.weareoneglobalfestival.com.