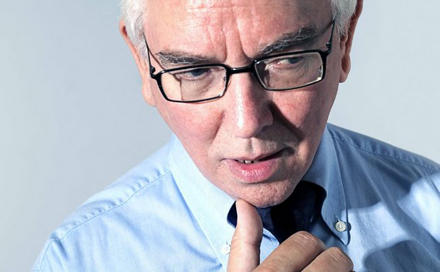 For a man whose films are defined by their intelligence and immaculate composition, Terence Davies is every bit as intelligent and immaculately composed as you might expect. But his passion for film and the arts in general quickly rises to the surface when you get him on to a subject about which he clearly has very strong feelings.

When asked how he tried to evoke the post-war setting of Terence Rattigan’s play, Davies talks about paying attention to the details: “You have to be true to the period.” He keenly remembers what it was like growing up in the fifties. This is a London that, amidst the bombed out ruins of houses waiting to be rebuilt, is almost serenely quiet – bar the occasional sing-song coming from a packed local pub. The absence of background noise amplifies the small sounds that would otherwise go unnoticed: the creak of a house, for example. Likewise, making a spectacle of yourself by having an argument in public was deeply frowned upon. When Hestor (played by Rachel Weisz) walks in to the pub and tries to get Freddie (Tom Hiddleston) to go home with her, Davies knows full well how shocking that would have been. “You just didn’t do that sort of thing in those days.”

“Terence, you’re the only person that hasn’t heard of Rachel Weisz.”

He likes the play a lot, but admits he re-wrote a good deal of it. The ending in particular needed to be changed, he says. “I didn’t believe it, and if I don’t believe something then I can’t do it. I just can’t.”

His decision to cast Weisz in the lead role was entirely fortuitous, he says. While flicking through channels on television one night, he came across a film that starred the woman now married to James Bond actor Daniel Craig. He recalls being captivated by her face, and her eyes in particular. Davies phoned his agent and asked whether he had heard of an actress by that name: “He said: “Terence, you’re the only person that hasn’t heard of Rachel Weisz.” When he finally spoke to her on the phone, he offered her the part almost straight away and told her he didn’t know who else he would cast if she turned him down. Thankfully, she accepted.

“I don’t care if George VI had a speech impediment, you know? Try getting a real job.”

His love of cinema as an art-form shines through. “The camera does something that no other medium can: it captures truth.” That doesn’t mean his love extends to every style of film-making, however; he is surprisingly contemptuous of the glossy period costume dramas that have propped up the British film industry down the years. “I couldn’t give a toss about Jane Austen. I don’t care if George VI had a speech impediment, you know? Try getting a real job.”

But he saves his real firepower for the current state of the British film industry. British culture is among the best in the world, he opines; yet raising finance for a film budget has become ever more difficult. He confirms the well-known problem about investors demanding a star be attached to a project before parting with their money, but talking to producers who don’t know enough about cinema and its history seems to be a particular pet hate of his. He recalls asking one such producer whether he was familiar with 1940s noir drama MILDRED PIERCE. The man shuffled uncomfortably, he says, apparently unwilling to lose face by admitting he wasn’t. He wishes people were more up front about what they know and what they don’t – something else that’s changed in people’s behaviour since the 1950s.

3 thoughts on “An evening with Terence Davies”