At the end of last year, the Cambridge African Film Festival re-emerged successfully with a fine slate of films that showed that there is certainly an interest in African film in Cambridge. Last week’s showing of ROBERT MUGABE…WHAT HAPPENED? is testament to that.

After a full screening on a cold winter’s night at the Cambridge Arts Picturehouse, director Simon Bright talked about why he made the film and his work as a filmmaker in his homeland of Zimbabwe.

TAKE ONE was there to record the proceedings…

Tell us some background to the film, what inspired and led you to make it?

I grew up as part of an activist family in Zimbabwe, my mother was teaching in black secondary schools in the sixties, and being followed around by the Rhodesian special branch – so we eventually left. It was Mugabe’s victory which meant that I could go back to Zimbabwe. To go back and help rebuild the country. As the film shows, those were good days, Zimbabwe achieved levels of development that have never been achieved before or since in Africa or probably anywhere else actually. In four years, literacy rose from 40% to 75%. Similar amazing gains in agriculture and health. I was part of a flood of Zimbabweans to be part of that development. And so, after I was imprisoned in 2004 by the same man that I had been supporting, I had to ask the question: What happened to Robert Mugabe? And so the film is my journey.

After I was imprisoned by the same man that I had been supporting, I had to ask the question: What happened to Robert Mugabe? And so the film is my journey.

What exactly did you do in Zimbabwe upon your return in the 1980s, what part did you play?

I was in the ministry of agriculture. Part of building the archives. I was making training video tapes, collecting footage for television and radio programmes, and so on. It was great, you know, I got a four-wheel-drive vehicle and a camera. I was able to roam all over the country, go wherever I wanted, to rural communities where we were welcomed. It was a fantastic way of discovering the country, a fantastic way of discovering something about peasant economies. It was a good time all round.

So was a lot of the footage in the film from your own collection, or at least from the films that you shot during that time?

Yes, we’ve been making films now for twenty years – but importantly, quite early on, when I got back to Zimbabwe, I thought about different models of production. I didn’t want it to replicate the BBC, for a variety of reasons. I was looking for other ways and forms to make films. Mozambique, very interestingly, had developed Institute Nationale Du Cinema and had invited progressive filmmakers from all over the world to set up a national film institute. In what was the poorest country in the world, and had just had a revolution and come to power with 11 graduates or something like that. They produced this fantastic body of filmmakers. And most of the significant productions that I completed over the next twenty years were untaken with Mozambiqean crews. Not all, but certainly a lot of footage that you see of mine – you know like the railway, when we came under attack, the peasant farming stuff. That was all done with Mozambiquean crews, because they were really great cameramen and they had a kind of freedom of style in the way that they interpreted stuff, and could relate to the subject matter as well.

Jumping forward, why then were you arrested? Was it the films that you were making?

Well, they didn’t explain why they were arresting me when they were doing it! They just put me in prison. It later transpired that they suspected that I was working for the BBC, for Panorama and making a film about youth militias. Which I wasn’t doing. So that made it easier, under questioning, to deny it of course. 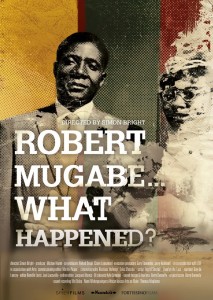 In documentaries like this, there never seem to be interviews with current members of Mugabe’s cabinet or close circle – which would have painted a different picture of Mugabe. Tell us more about who you chose to interview and why?

I did interview Tekere, who did spend ten years with him in prison in the ‘60s – who was the first secretary ZANU; I did interview Simba Makone, who was part of ZANU during the struggle, living in Europe, who was Deputy Minister of Agriculture and eventually became Minister of Finance. I mean, those are some representative voices. We did ask Mugabe for an interview, but only after we had got out and got the film footage out. I wasn’t prepared to go undercover and risk submitting a formal application and have a CIO attached to me. I didn’t think I would get the interviews that I got from these men, especially if we had an intelligence operative attached to us. Obviously, we did not get the interview. But, like I said, we secured the film beforehand, rather than attracting attention by asking for an interview first.

There is another dimension, which is that inside Zimbabwe there isn’t a freedom of speech in the broadcast media, in terms of television, radio. Mugabe puts across his point of view as he wishes. I didn’t feel that I needed to go for an artificial pretence of balance. I did regret not interviewing Jonathan Moyo, the Minister of Information; I think that would have been interesting – he is the architect of Mugabe’s propaganda, which as you can see is quite powerful.

Inside Zimbabwe there isn’t a freedom of speech in the broadcast media, in terms of television, radio. Mugabe puts across his point of view as he wishes.

The film seems to set up the good-guy-turned-bad narrative, yet one of the speakers mentions that he is actually the most remarkably consistent man, and has simply been consolidating power. Having now made the film, what are your views?

I think I am starting to come around to that view – expressed by a war veteran, who knew Mugabe since Mozambique days; since before he came to power in Zimbabwe. I would say that my view has evolved towards his view, in the course of making the film. I did think that he was a man who had changed over time. I’m not quite as certain now. When you look closely at the facts from the Matabeleland genocide, which took place three years after Zimbabwe independence, at the height of Zimbabwe’s success of rebuilding. It was such a ruthless reaction. He used the whites against the Matabeles. The Matabeles were the only serious opposition to Mugabe – so he got rid of the opposition. Now he tries to unite people against the whites – or whoever – he uses divide and rule the whole time.

You know, I looked at him from childhood – and I could have got a lot of stories about his childhood, some of those guys were at school with him. I met Chikarema, a cousin of his, in 2003 and he said to me, ‘What you need to understand about Mugabe is that he is vengeful, he’s jealous and he will never give up power.’ When you’re dealing with history, and a guy like Mugabe, you are reinterpreting a person with the eyes of the present and not allowing for the fact that human beings develop. When you embark on something like a revolution as a young person, you hold an optimism for the future – but you have to understand that being a revolutionary is not the best training ground for democracy. You’re not going to get there by being a liberal, you’re going to get there by having a steel fist, or else you’re going to get shaken around. It’s the age-old question: What do you do with the liberators?

What is your plan for the film now, has it been shown in Zimbabwe or Southern Africa and will it be shown there? If yes, what was the reaction?

The film opened the Encounters film festival in Cape Town and on the opening night they had to show it in two cinemas because of the demand. They had to put on extra screenings during that festival, where it was the most watched film. Then it opened in the Labia Cinema in Cape Town where it ran for two months.  It screened in Johannesburg and Durban to full houses and will return to Joburg this year to play at the Bioscope Cinema.

The film has been shown in Zimbabwe but not in public . I get lots of requests through facebook for copies of the film from there though. There are quite a few copies circulating, and I’ve received one comment which is representative of the reactions I have had: “There is a huge demand for copies of the movie. More will be definitely in order and our people have a huge appetite for the film.”

Simon Bright has a directed a number of films in and around his native Zimbabwe, and is also festival director of the Afrika Eye film festival in Bristol. Please visit http://afrikaeye2010.blogspot.com/ for more information.

One thought on “Simon Bright Q&A”