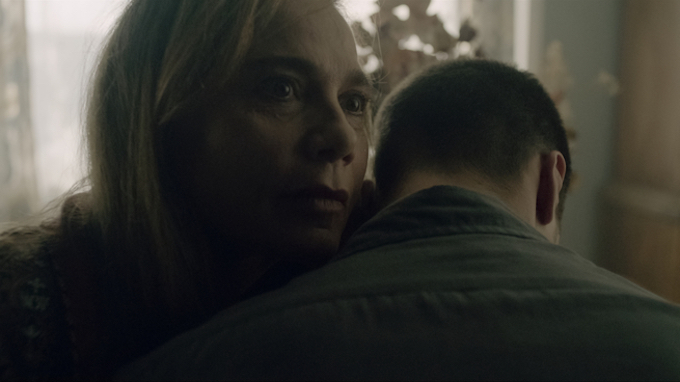 A film weaving themes about the importance of artists, in an age where everyone believes themselves to be one, should have something of a naturally receptive audience on the arthouse and festival circuit. Although MAYA DARDEL features an excellent performance from Lena Olin as the title character, it’s not only preaching to the converted but testing their patience.

Moved to kill herself, the notable writer Maya Dardel (Olin) lets it be known that she is seeking young male – and only male – writers to act as executor of her will and take charge of her estate. Numerous candidates are ‘interviewed’ at her rural home, where they are assessed for their mental, literary and physical acumen. Maya brings in a parade of self-satisfied and smug arseholes, spouting pseudo-intellectual guff. It’s not always clear what the intended message is, but this isn’t surprising given these sequences have their heads firmly where the sun doesn’t shine. Having gone through both oral gymnastics and oral sex with these boys, Maya eventually changes her tune with the arrival of Ansel (Nathan Keyes) – a man so frail and weak it seems that he has survived purely on kale and vitamin supplements up to this point. His counterpoint is Paul (Alexander Koch), a more testosterone-heavy version of the arseholes from pseud’s corner who we met earlier.

Not even the superb photography can atone for the pretentious, over-written dialogue…

MAYA DARDEL is so satisfied with its lofty goals and supposedly intellectual dialogue it even attempts the bold endeavour of an ’empowering’ rape scene, when Paul forces himself on Maya in an attempt to display his masculinity. Maya is portrayed as having taken back control during the scenario, and Olin’s range in it is remarkable, but to what end is not clear. Even if we put aside the overuse of rape as a offensively lazy story propellant in pop culture generally, it is narratively redundant and thematically empty here. Maya has already displayed her physical and mental domination of numerous men, including Paul. There is a small payoff to this scene later in the film, tangentially referenced at Paul’s supposed wider comeuppance, but the attempt is something of a poor signifier of how highly this pompous script regards itself.

Not even the superb photography can atone for the pretentious, over-written dialogue, although Lena Olin is always engaging, and Rosanna Arquette‘s scenes with her are amongst the better ones. The fact she gets so much mileage from such nonsense is a testament to her ability, but the philosophical mumbo jumbo being spouted is of the level of drunken bar talk, without the slurring.

Originally titled A CRITICALLY ENDANGERED SPECIES, as if to imply the threat to genuine creatives, the threat to this film is very much an internal one.