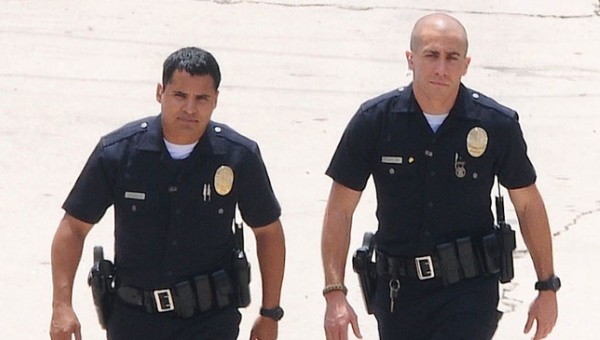 ‘Once upon a time in South Central’ states the slightly pretentious opening title card, in David Ayer’s found-footage action drama. A more accurate subtitle might be ‘The LETHAL WEAPON Project’, being a mostly by-the-numbers tale about two LAPD officers who bite off more than they can chew when they start sniffing around a drug-pedalling gang. Its only innovation is to present the story as if it had been recorded by the lead characters, and even then it drops that approach after a while, mixing in some Bourne-style shakycam action so that things stay intelligible.

Our two cops are Jake Gyllenhaal and Michael Peña, the former a stereotypical educated white middle class male, with his sights set on a legal career and in search of a soulmate; the latter a stereotypical Latino husband and father with an enormous extended family and a willingness to resort to violence in order to keep the peace. This odd couple bicker, laugh, and call each other ‘Dude’ and ‘Bro’ to an excessive degree. Meanwhile the gangsters ride around in big cars with big guns, shooting up rival gangsters and using the F word, also to an excessive degree.

Yes, the found footage angle is a gimmick, but it is an effective, well-executed gimmick …

They say there’s nothing new under the sun, and END OF WATCH does indeed teeter on the brink of parody more than once. Overcoming the clichés, though, are the two lead performances, with Gyllenhaal and Peña sharing a camaraderie that feels natural and spontaneous – almost improvised. Crucially, the humdrum quieter moments are just as enjoyable as the explosive chase ‘n’ shoot ones, if not more so; their ribbing a colleague or getting drunk at a wedding gives their characters a warmth and credibility frequently lacking in the genre. The WAGs (Natalie Martinez and Anna Kendrick) are rather two dimensional, but both actresses do enough to make them work.

But the star of the show is the photography and editing. Yes, the found footage angle is a gimmick, but it is an effective, well-executed gimmick. Ayer summons humour, suspense and mystery from his script, with the “hidden” cameras (installed in places like car seat wells, or clipped to the front of shirts) getting us up closer to the action than usual. It initially feels a bit like POLICE CAMERA ACTION! without Alistair Stewart, while later on it almost turns in to a video game, with P.O.V. shots of Gyllenhaal and Peña brandishing guns while under fire. It’s tense stuff, though you half expect to see an ammo counter in the bottom left corner of the screen. That aside, the gimmick works: Ayer has delivered a decent little thriller which, despite its familiar ingredients, deserves to find an audience.

One thought on “End of Watch”