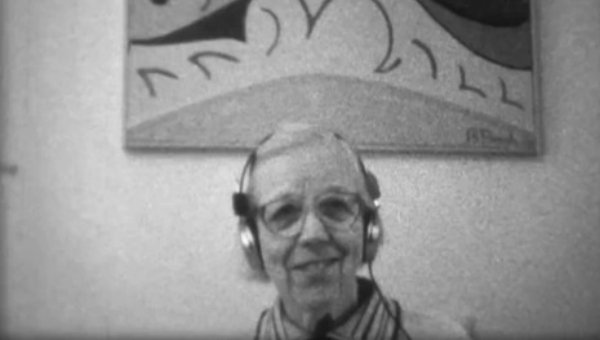 Shot over a period of seven years on bleary Super8 film, GRANDMA LO-FI: THE BASEMENT TAPES OF SIGRIDUR NIELSDOTTIR gives an amusing insight into the working mind and thought processes of a septuagenarian garage rockstar.

With a creative mindset redolent of R Stevie Moore in the States, Níelsdóttir was an oddball icon, treasured on the Icelandic underground scene for her preposterously fruitful output (59 albums and 687 songs in 7 years), charming persona and undying imagination. Compiled by a trio of directors, this quaint film accurately captures the hearty, satisfied enigma.

Releasing songs, she claimed, was just like sending your children out into the world.

71 may seem like an odd age to kick-start your musical career, but as Níelsdóttir leads us down through her unpretentious Reykjavik basement in knitted cardigan and yellow bonnet, it’s obvious she couldn’t give a toss. She did what she enjoyed, and that was that. Music became her companion, and production a liberating exercise. Concocting a peculiar, often extemporaneous potpourri of CASIO twinks, nonsensical lyrics and atypical instrumentation, it quickly becomes clear she wasn’t exactly a musical genius, but it’s her tireless spirit which really stands out. And her humour, too – the complex symbolism behind her musical contraptions, for instance: crumpled tin foil for camp-fire, and cream whipper for helicopter. Releasing songs, she claimed, was just like sending your children out into the world.

…it quickly becomes clear that family and fauna are the themes closest to her heart.

In spite of its 65-minute run-time, the three film-makers still manage to (briefly) trace the doyen’s life-story, using guest appearances from a coterie of young musicians such as Hildur Guðnadóttir and members of Múm. They say there was a sixty year gap since her last music practice, playing piano at age 11, but her passion for it had obviously lingered. And as we speedily drift from her life in Denmark during the Nazi occupation to her eight years spent in Brazil, it quickly becomes clear that family and fauna are the themes closest to her heart. In fact, it seems that when she’s not making music, she’s croaking, neighing or purring.

Perhaps the most remarkable asset of the direction is its elegant use of stop-motion animation. Níelsdóttir had become obsessed with collage-making and drawing in the couple of years prior to her death, and this artwork of hers has been superbly incorporated. With added colour and wit, this leaves GRANDMA LO-FI as a fitting and watchable tribute to a woman who was in perfect harmony with an unnecessarily pernickety world.