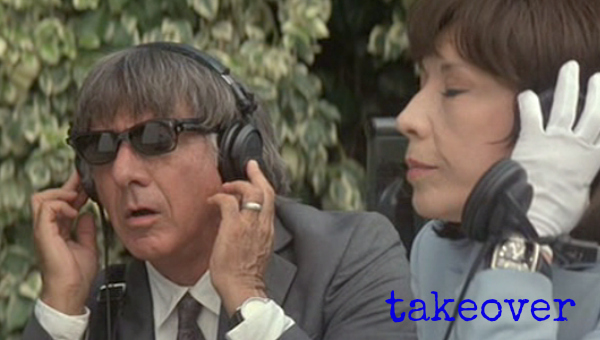 I ♥ HUCKABEES, also known as I LOVE HUCKABEES, was billed on release as a philosophical comedy. Polarizing to critics at the time, HUCKABEES seemed to alienate depending on whether anticipation of the film’s worth was weighted too heavily towards philosophy or comedy. Director David O. Russell refuses to bend in either direction, co-existence being the challenge of the film.

Albert Markovski (Jason Schwartzman), works with Open Spaces, an environmental non-profit dedicated to fighting urban sprawl, which has formed a tenuous coalition with big-box retailer Huckabees, The Everything Store, through glossy corporate spokesperson Brad Stand (Jude Law). The coalition is vaunted as mutually beneficial, although it’s readily apparent the only real advantage is to Huckabees, as plans escalate for a celebrity-studded awareness campaign.

Through a string of coincidences related to his connection to Huckabees, Albert finds and hires Bernard and Vivian Jaffe (Dustin Hoffman and Lily Tomlin), a husband and wife team of existential detectives. They encourage him to dismantle his reality in order to see the interconnectedness of all things beneath everyday perception, pairing Albert with another client, a post- “big September thing” fireman, Tommy Corn (Mark Wahlberg). Brad brings his own case to the detectives, hoping to discredit Albert as their tug of war over the coalition spirals out of control. Meanwhile Brad’s pretty, perfect, face-of-the-company girlfriend, Dawn (Naomi Watts), gets involved in Brad’s investigation and finds herself up her own existential creek. The Jaffes’ rival and former student, Caterine Vauban (Isabel Huppert), arrives from Paris; Vauban, whose practices radically differ from the Jaffes, entices Tommy and Albert to contemplate the inherent cruelty and meaninglessness of the universe. Vauban encourages Albert to take control of his interactions with the universe; a chaotic hail of further coincidences ensues.

HUCKABEES, like Albert, is ostentatiously self-conscious, but Russell knows the cards he’s playing and counter-balances the wide-eyed sincerity of Albert and Tommy with Tomlin and Hoffman’s acerbic, delightfully unconventional detectives. Huppert’s grim sophistication is advantageously elastic. “There are moments when two people share the deep sorrow of human existence,” she says to Tommy of a dalliance with Albert, turning it into a lesson on the inherent nihilism and absurdity of human nature. Making light of tropes and topics in more ways than one, HUCKABEES paints rampant consumerism, corporate takeovers, dwindling oil reserves, cultural assimilation, Sudanese refugees, dysfunctional families, poor communication, and petty work rivalries as all part of one large, infinitely interconnected picture.

Ridiculousness, it suggests, might be part and parcel of the human experience.

While HUCKABEES doesn’t demean the earnestness of the topics or the characters it has no problem allowing them to appear ridiculous. Ridiculousness, it suggests, might be part and parcel of the human experience. The process of interrogating the meaning of existence peels away not only Albert’s insecurity and pretentiousness but the alpha-dog power-couple shine covering the all-too-human underbellies of Brad and Dawn. A scene in which Tommy and Albert have dinner with a religious family in the suburbs starts off amiably and ends with throwing rolls while debating whether God would approve of unrestricted corporate growth. Vauban reveals to Albert the degree to which childhood pain influences his present-day predicaments, a moment that could verge on cloying, but manages to painfully illustrate her point without losing humor. Jon Brion’s score is simultaneously haunting and emotionally uplifting, and the film’s visual palette and effects serve to illustrate the interior scope of the characters. Russell ties a tidy, shiny comedic ribbon around the narrative and philosophy and leaves it to the viewer to unwrap.

One thought on “Takeover: I ♥ Huckabees”