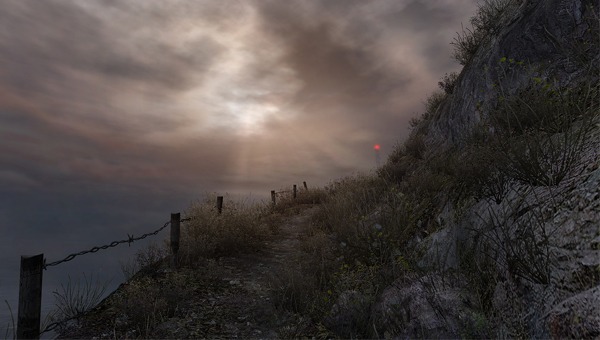 In video game theory, “narratological” and “ludological” are terms used to categorise a game’s design ideology. A ludological game is one in which the laws of the game are its governing force, whereas a narratological game relies largely on its story as the player’s motivation. These definitions have long been a topic of discussion for theorists as they try to agree which is the best way to understand video games.

… a micro-narrative akin to Italian Neorealism or American independent cinema …

Therefore, reviewing DEAR ESTHER for a film journal is surely indicative of the game’s near dogmatic stance on the narratological and ludological divide in video game theory. DEAR ESTHER has developed its narratological structure with such determination that it could be considered a new form of participatory cinema. By virtually integrating the viewer into the action, the game generates a highly effective sense of experiential realism that can’t be experienced in non-participatory film formats. DEAR ESTHER is a finessed and sophisticated experience throughout, as directors Dan Pinchbeck and Robert Briscoe’s story telling is as refined as their technical approach to the medium. The plot could be best described as a micro-narrative akin to Italian Neorealism or American independent cinema, a rare and welcome departure from the typically colossive narrative excursions found in video games.

The player interaction is minimal: the only named characters are absent, and no key events punctuate the user’s navigation of the environment. At times, it feels more like an interactive painting than a game: DEAR ESTHER encourages a form of digital exploration bordering on meditation. Its pensive score, coupled with some gorgeously mundane locations – such as the M5 between Exeter and Bristol – enforces a collaborative manifesto of self-reflection with the player. DEAR ESTHER is as much an inward journey as it is an exploration of the virtual space.

The sound of pebbles grinding underfoot on the beach triggers thematic connections with THE SEVENTH SEAL.

Perhaps islands and beaches are tired metaphors for mortality and the self, however they are successful as cognitive association tools. The sound of pebbles grinding underfoot on the beach triggers thematic connections with THE SEVENTH SEAL. The meditative approach to film making associated with Ingmar Bergman’s films is also echoed within the gameplay of DEAR ESTHER. Traditional film narrative relies heavily on a refined and dependable structure of key events, on top of which the specifics of the story are mapped; there is a similar checkpoint mentality in even the most narratological video game adventures. DEAR ESTHER deviates from this, with no pressing motivation to achieve reoccurring  objectives. Similar to Bergman or Tarkovsky’s films, DEAR ESTHER allows the player space in which to breath, observe and contemplate as the voice over acts as an antithesis to the environment.

Built in the HALF LIFE 2 source engine, DEAR ESTHER looks lush. While the graphics are not ground breaking, they are flawless and thechineseroom’s proficiency with their artistic tools is beautifully demonstrated. The design is also well-considered and impeccably executed. The island is consistently intriguing with a well-balanced helping of secrets and variations that ensure the viewer is never bored, and also never distracted from the task at hand. Likewise, the story unfolds itself at a rewarding pace, teetering nicely on the edge of satisfaction and curiosity. The narrative is driven by event-triggered dialogue, cued up to coincide with startling hallucinations that tastefully seep into the virtual environment. Anyone who has played a video game will be accustomed to wading through badly acted and clichéd dialogue; fortunately, DEAR ESTHER’s entertaining voice-over is creative and often inspired.

DEAR ESTHER’s temporal logic is more like an alphabet soup …

However, the visual and narrative aesthetics are only half of this story. DEAR ESTHER is a revolution in narrative structures, as the viewer instinctively choreographs its cinematography and pacing extemporaneously. If a conventional film’s temporal logic flows in a linear fashion – from A to B – then DEAR ESTHER’s temporal logic is more like an alphabet soup. This mechanic allows its narrative to be experienced intuitively in pure time, similar to a real-life experience. As viewer and participator, we gain a level of understanding for the subject matter which is articulated in an abstract and profoundly realistic way. With DEAR ESTHER the viewer is able to strategise his or her own experience. They are free to savour an instant that moves them, or to rush past events that disinterest them. The expanded participation element of DEAR ESTHER draws the viewer deeper into the storyline, and while this might not be a wholly original concept in interactive entertainment, here it is asserted with such potency that one cannot dismiss its pertinence in the development of the contemporary moving image.

One thought on “Dear Esther”