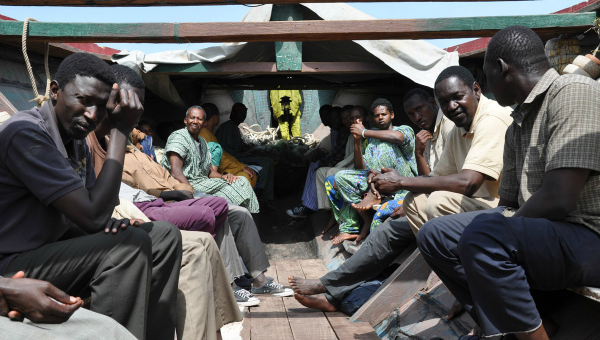 The Senegalese ‘Un Certain Regard’ nominee LA PIROGUE is an arresting, humble and sincere film. A bleak, inescapable outcome looms persistently over the proceedings while the film dares the audience to hope in futility for the safety of the 30-strong ensemble. The simple plot, a treacherous trafficking expedition from Senegal to Spain by pirogue (a long, narrow, engine-powered canoe typically used for fishing), allows for a thorough and plausibly accurate exploration of events that seemingly leaves no detail unturned.

…great swathes of time are leap-frogged over in a manner that feels natural, unabridged and satisfying…

Owing to this, LA PIROGUE’s greatest triumph is that it feels like a tragically authentic journey, which is no slight against its quality. A somehow translucent pacing is masterfully achieved where great swathes of time are leap-frogged over in a manner that feels natural, unabridged and satisfying. The recurring motif shot of the pirogue hauntingly nodding adrift in an opaque blackness effectively symbolises the passage of days as well as perfectly reaffirming the tone of the film.

LA PIROGUE is not a flawless masterpiece, though a motivation as grandiose as this is clearly contradictory to the entire ethos of this wholly unpretentious production. Perhaps its only real fault is that it loses sight of being an arresting drama in favour of attempting too conscientiously to be aligned with a zeitgeist. Certainly it is commendable that director Moussa Touré aims at raising awareness of the risks associated with immigration, humanising the issue in a way that is hopefully shocking to those who remain ignorant, but to approach this in such a mindful and surface-value way arguably lessens the impact of the film.

…Touré, who is for certain an important new talent, never falls short of making compelling cinema…

There are times where stronger character development in the script could have allowed for more impact when they suffer various misfortunes. The tragedy is still doubtlessly affecting, largely due to the strength of the film as a spectacle, yet the loss of some of the characters unfortunately lacks that most enigmatic and sought after phenomenon in a work of fiction – an audience mourning their deaths.

It feels over-particular to call this aspect of the film a shortcoming, and Touré, who is for certain an important new talent, never falls short of making compelling cinema. He sets the bar high, no doubt unintentionally, for Ang Lee’s upcoming LIFE OF PI adaptation; the hope being that Lee can conjure as authentic and natural a sense of despair in being stranded at the mercy of the ocean.