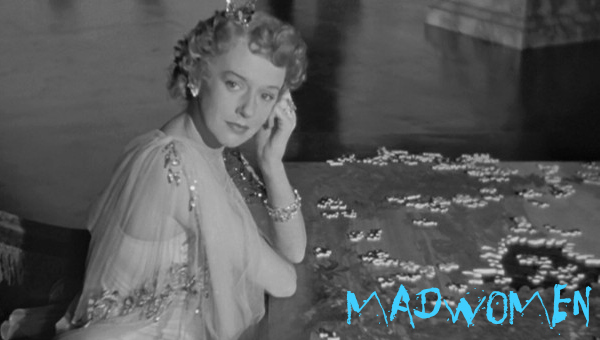 Throughout his life Orson Welles was a voracious reader, turning to great works of literature time and time again, and adapting them for the stage, screen and radio. Even in his original works it is hard not to see certain references and characters borrowed from some of history’s most important writers, and moulded to fit with Welles’ distinctive cinematic visions. How much he directly borrowed for his original screenplays is open to debate, but one figure that he seems to have lifted is one of Charles Dickens’ most famous creations: Great Expectations‘ Miss Havisham.

Whether intentionally or subconsciously, Welles took this lonely and bitter archetype and weaved his own version into his debut masterpiece CITIZEN KANE. Like Miss Havisham, Charles Foster Kane’s second wife Susan Alexander Kane is a character trapped by her past and unable to move on from a man whose own personal failings end up defining the rest of her life.

We first meet Mrs Kane in a little, run-down music venue. The camera pans through the rooftop-sign bearing her name, before passing through the skylight. It was one of the most technically advanced pieces of camera work of its time and is a great example of Welles’ innovative approach to cinema. Susan is sat hunched over a table, tears in her eyes, having just learnt of her ex-husband’s death. When Mr Thompson, a journalist trying to find out the meaning of Kane’s mysterious last word “Rosebud”, approaches the widower he is barked away. At first we assume her tears are mournful, but as the film develops we realise that perhaps it is not that simple. Is she crying for the loss of his life? Or the loss of her own?

Susan’s marriage to Kane has left her an emaciated, depressed widow…

When we return to Susan later in the film she is less hostile, and she reveals to Thompson the secrets of her unsatisfying marriage to a self-centred megalomaniac. Through flashbacks we find out about their initial affair that ruined Charles’ first marriage and thwarted his fledgling political career; how he pushed her into an opera career in which she had no hope of succeeding; and finally we see the withering of their loveless marriage, ending ignobly in Kane’s lonely, self-created Xanadu.

Susan’s marriage to Kane has left her an emaciated, depressed widow, and as Thompson learns of the tragedy of her life, we are reminded of Pip’s encounter with the spectre-like Miss Havisham. However, while they have many similarities, Susan is not as maniacal or as cruel as Dickens’ creation. She doesn’t toy with Thompson as Miss Havisham does with Pip. Instead, through melancholic words, she laments a man who cared more about collecting statues than he did about his wife.

Whilst Miss Havisham’s downfall was that Compeyson ran out on her before their wedding, Susan’s great tragedy was the fact that her marriage simply went on too long – tediously completing jigsaw puzzles in lonely halls and occasionally being slapped by her husband. Instead of the revenge that Miss Havisham craves, Susan wishes nothing more than to be left alone so she can drink highballs into the early hours of the morning, and ignore the inescapable fact that she has wasted her life.