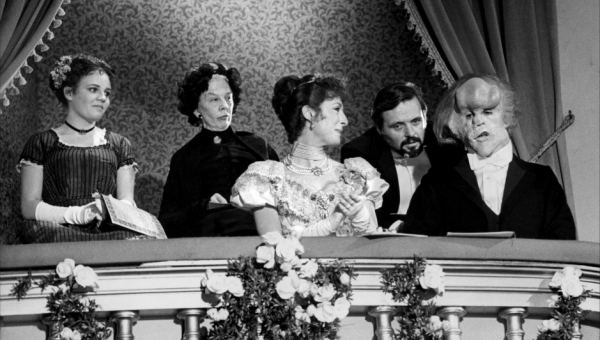 David Lynch’s THE ELEPHANT MAN was an unexpected triumph when it came out in 1980. A young filmmaker, relatively inexperienced and largely unheard of to all but the most assiduous followers of leftfield American cinema, Lynch was able to win the prestigious César Award (an accolade he wouldn’t receive again until 22 years later) and generate a box office profit over five times that of the modest $5 million budget. The astute decision to shoot in monochrome (which Mel Brooks, the film’s invisible but fervently supportive benefactor, fought hard to accommodate) ensures that rare and sought after could-have-been-made-yesterday quality.

It is neither Freddie Francis’ immaculate cinematography nor the defining performances that have been brought into question by its critics. Instead, the film’s historical accuracy and ethics are the focal point of scrutiny; challenging its portrayal of disability and over-reliance on Treves’ subjective accounts.

One of the first to express anger towards the film upon its release was Roger Ebert. In his review, the critic took issue with what he perceived as an attempt to depict Joseph Merrick as ‘courageous’. He felt a distinction needed to be made “between the courage of a man who chooses to face hardship for a good purpose, and the courage of a man who is simply doing the best he can, under the circumstances” – with Merrick falling under the latter definition. He goes on to say that “the whole structure of THE ELEPHANT MAN is based on a life that is said to be courageous not because of the hero’s achievements, but simply because of the bad trick played on him by fate”, as well as describing the film’s philosophy as “shallow” and patronising.

A second critical standpoint takes issue with the film’s fast and loose handling of the facts. At the Cambridge Arts Picturehouse screening in October, Vanessa Toulmin (of the University of Sheffield and National Fairground Archive) asserted that the film makes her job harder, as it disseminates falsified history to unsuspecting audiences. This is largely due to the fact that the film’s source of research was, for the most part (as it freely admits in its opening titles) from Treves’ published ‘reminiscences’: a record that has been increasingly called into question.

Another critic giving a much longer and more elaborate account was Paul Anthony Darke, in an article from the journal Disability and Society. His argument straddles both of these views, extrapolating that together they resulted in a deplorable depiction of disability. He argues that the character of Treves (Anthony Hopkins) is a conduit for the film’s dubious morality, believing he is portrayed as righteous and that everything he does is in Merrick’s best interest, while in actual fact he is exploitive, opportunistic and morally bankrupt.

In fairness to the filmmakers, and in the interest of enjoying the film more, the audience should bear the following in mind:

No character in the film, Treves or otherwise, is necessarily intended to be seen as unwaveringly representative of the film’s agenda or as morally correct.

The film’s treatment of disability would likely be very different today than it was in 1980; a much less sentimental film might have been made in the interest of realism (DIVING BELL AND THE BUTTERFLY being a good example). Yet it certainly does not show Treves’ treatment of Merrick in a favourable light, particularly in their early encounters, which Treves later acknowledges with much chagrin. His heinously humiliating examination of the nude Merrick in front of his peers is exactly the kind of act from which he had rescued the man, and once his perception of Merrick has become more humanised, he sits up late at night worrying that he is no better than the predatory showman Bytes (Freddie Jones). Treves is seen to go through real growth of understanding towards Merrick and his condition throughout the film, but he is not seen as morally correct at all times. He fails to attain a complete understanding of Merrick, and perhaps contributes to Merrick’s suicide, which is driven by the desire to become ‘normal’.

With regard to Ebert’s issues surrounding the film’s theme of ‘courage’, this is a surprising view: no character makes any remark at all praising Merrick’s courage or bravery. Comments are made to the effect of him being a soulful romantic at heart, from Mrs. Kendal’s line in response to Merrick reading Shakespeare:

Mr. Merrick, you’re not an Elephant Man at all. You’re Romeo.

to Treves and Mr. Carr-Gomms’ observations, upon the realisation that Merrick is sentient and can communicate:

Can you imagine the kind of life he must have had?

I don’t think so. No one can possibly imagine it! I don’t believe any of us can!

However, no allusions are specifically made to his courage or bravery.

Very few of the views expressed by the characters or imagery are shared by the film or its makers. Usually they are symptomatic of the culture and period the film aims to represent. Treves’ ignorance is not necessarily indicative of an evil or malicious character (though whether the real-life Treves had these qualities is a matter of some debate), but is rather an attempt to accurately emulate Victorian attitudes towards the Elephant Man: hostile, scared and confused by something they couldn’t comprehend. This behaviour towards Merrick is recurrent throughout the film and, contrary to Darke’s opinion, is not specific to any class.

One of the chief upsets shared by all the aforementioned critics is its opening imagery of elephants and a writhing, screaming woman, followed by a cloud of smoke. Many see this as symbolising the myth, which Merrick and his showmen perpetuated in real life, regarding the developmental stages of his birth; that an elephant mauled his mother while he was in the womb. Without doubt it is a reference to this myth, but it does not necessarily follow that the film subscribes to such an explanation; merely that it depicts the Victorian audience’s misconception in a mysterious and abstract way. The cloud of smoke after these images quite conceivably communicates a waiver of responsibility towards realism in this regard, and neatly avoids any need to explain Merrick’s condition, the exact nature of which is still a matter of debate.

The film is not a historical text and should never be revered as one.

The argument that the film is somehow substandard due to its historical inaccuracy is unfair, as the same could be said of many other period films that are just as factually carefree, yet which are celebrated by audiences regardless (BRAVEHEART, TITANIC and GLADIATOR to name but a few of the most glaring). Also worth remembering is that, while this film popularised interest in the Elephant Man and more extensive research was undertaken after its release, the information used in its production was almost certainly all that was available on the subject at the time.

It is in fact closer to, and best viewed as, David Lynch paying homage to IT’S A WONDERFUL LIFE…

Regardless, THE ELEPHANT MAN doesn’t strive for historical or ethnographic weight. It is in fact closer to, and best viewed as, David Lynch paying homage to IT’S A WONDERFUL LIFE, a film he has always cited as a favourite: one that recklessly, and somewhat endearingly, wields enormous over-sentimentality and bittersweetness in a very similar way. Any fault THE ELEPHANT MAN has with regard to accuracy is likely to be found in its misguided marketing – some editions of the film on DVD or VHS releases claim the film is ‘the true story of the Elephant Man’, which is simply inaccurate.

It is unfortunate that, as Toulmin and Darke both point out, the showman in the film (Bytes) is portrayed with such disproportionate venom and sleaze in comparison to the real-life showman with whom Treves had dealings (Tom Norman). Many historians now believe that Norman’s reputation and career were irreparably damaged by Treves. In reality, he was an active supporter of temperance rather than a drunk, and Merrick wrote to him from the hospital expressing his dissatisfaction with his current living situation. He would have preferred to work with Norman. Again, however, this fault stems from the film’s limited information sourcing, as it was Treves’ writings that were instrumental in underhandedly discrediting Norman.

THE ELEPHANT MAN is a great piece of cinema whose only real fault is that the historical account on which it is based has come to be largely invalidated, and therefore some of its sentiments appear dated. It does raise questions, however: to what extent does a filmmaker need to take responsibility and care when approaching a historically factual subject? Does it depend on the type of film and their reputation as a filmmaker? And should a film’s reputation suffer if its source material falls out of favour with later generations?

One thought on “The Elephant Man”