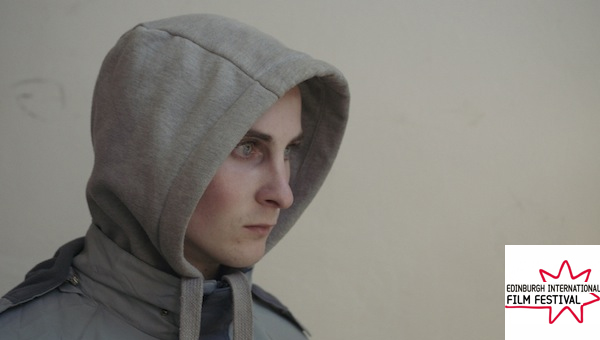 Director Mira Fornay is a graduate of Prague’s FAMU International, whose fellow alumni include Milos Forman, Vera Chytilová, Jan Němec and Emir Kustirica.  MY DOG KILLER is Fornay’s second feature, after the 2009 Czech-Irish co-production FOXES. Set on the border between Moravia in the Czech Republic and the Slovak Republic, MOJ PES KILLER uses many tenets of cinematic realism. Fornay chose to use non-professional actors from the area, bringing an honesty and believability to the performances.

The picture Fornay paints is one of hardship and struggle. Marek (Adam Mihál) is a drawn, haunted-looking 18 year old skinhead who has fallen in with a Neo-Nazi gang. His father is an alcoholic, his mother estranged. The only element of his life over which he has control is his pet dog, Killer. Fornay hints at the latent violence within Marek by placing objects of violence in his hands – a chainsaw, his dog straining at its leash.

Protracted long shots associated with this form of film making will be recognisable to viewers familiar with Ulrich Seidl and the Romanian New Wave. Everything is hard work in this existence, and the aesthetic choices reflect this. Characters are frequently constricted within the composition. The effect is frustration and alienation.

MY DOG KILLER…is about the consequences of neglect on humanity.

Concepts of belonging and identity are often prevalent in films dealing with the realities of modern day life on the borderlands within Eastern Europe. Shifting borders and sudden, sometimes violent changes in identity and affiliation contribute to the insecurities of these communities. The Catholic Church and Jozef Tiso, priest and the controversial head of the pro-Nazi Slovak satellite state of World War II, provided connection within this community, but it is an affiliation with the past, easily eroded by the realities of the present.

Marek’s life is physically split between different elements and places. His loyalties are also torn along these lines, between his father in his village, his mother across the border and the neo-Nazi gang for whom he is only useful because of his dog.

MY DOG KILLER is not a film about right-wing extremism in Eastern Europe, rather it is about the consequences of neglect on humanity. Marek is as neglected by his parents as the community feels it is by the state. Like FOXES, MY DOG KILLER deals with a familial clash brought about by a traumatic event in the past. Despite an accomplished and intelligently produced film, there’s a lack of impact. The dog Killer is felt primarily in its absence as we await the inevitable tragedy that forms the narrative crux of the film. When it comes it feels predictable, purposeless, and leaves one feeling utterly cold. Perhaps that is the point.

One thought on “My Dog Killer (Moj Pes Killer)”