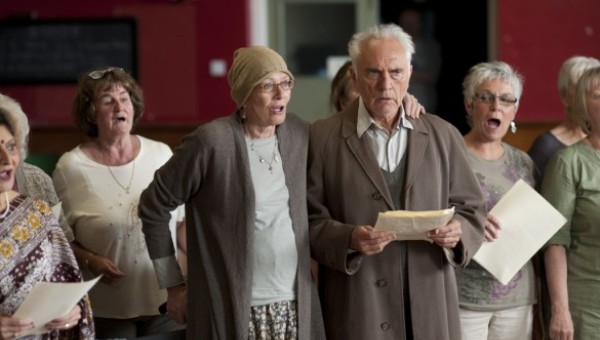 A modest film with modest charms, SONG FOR MARION sees Terence Stamp on impressively dour form as a husband faced with the prospect of losing his wife to cancer. After the darker subject matter of earlier works like THE COTTAGE and LONDON TO BRIGHTON, director Paul Andrew Williams’ latest is – despite the subject matter – a slighter affair, and perfectly timed to capitalise on recent ‘grey pound’ hits like QUARTET and THE BEST EXOTIC MARIGOLD HOTEL. In truth, there is nothing here that hasn’t been seen many times before, but its most affecting moments can be put down to the strength of its cast, who provide much-needed dramatic ballast when the plot’s flimsiness threatens to sink it.

Williams at least has the balls to cut to the chase – no drawn out diagnosis drama here. We find out almost immediately that Marion (Vanessa Redgrave) is dying of cancer, and has opted to live her last few weeks at home where permanently grumpy husband Arthur (Stamp) cares for her. Marion finds escape from her condition by attending a community choir, run by perky young school teacher Elizabeth (Gemma Arterton). When his wife finally passes away, the pain is so great that Arthur cuts himself off from the world, refusing to have anything to do with anyone, including his estranged son James (Christopher Eccleston, sadly wasted in a throwaway role).

It’s Stamp’s show and he grabs it with both hands.

It doesn’t take a genius to see where the story is headed (clue: there’s a singing competition and a newly empty spot on the team), which means there’s even more pressure on the performances to deliver. Stamp’s granite-like turn is well-judged, delivering sardonic one-liners one minute, and raw internal emotion the next. Redgrave is excellent too, the extreme contrast between Marion and Arthur only making his loss more affecting. Arterton could probably do the ‘cheerfully likeable’ routine in her sleep, but the way that she coaxes Arthur out of his shell is still the crucial thread by which the story hangs, and her appealing turn makes it work.

Tonally, SONG FOR MARION is on less certain ground. Williams seems to want to accentuate the positive even when it goes against the action on-screen; the jaunty soundtrack makes infuriating attempts to uplift moments of keen sobriety. Other scenes have the sensation of hurried first takes, not the sombre, reflective moments they perhaps should be. But the film delivers when it counts: the closeness that Arthur and Marion share early on, and later on, the husband’s final tribute to his wife. It’s Stamp’s show and he grabs it with both hands.

“… it was as though the universe was giving me a second bite, and then I felt ‘Yes, maybe this has got my name on’…

In the Q&A after the screening, the actor was in generous form, regaling the audience with stories of his youth growing up in war-torn London, his early career spent travelling in the East, and the methods he employs when performing. He said he had no reservations about playing a pensioner. “I asked Herbie Kretzmer, my oldest friend in England, who wrote the lyrics for Les Mis, and I was telling him about it and he said “Well, Terence, you’re opening a door you can’t close. Everyone will finally know how old you actually are”. And I thought, “I’m not worried about that!”

But it was another factor that made his mind up: “What finally convinced me was that I had turned down King Arthur in “Camelot”, and I’ve always regretted it. To this day, I regret it. And I turned it down from fear, really – I turned it down because I didn’t feel I could sing the score, I thought they’d re-voice me, all kinds of silly fears. And at the point Vanessa [Redgrave] was cast, who had played Guinevere in “Camelot”, I thought “Well, Vanessa’s playing my wife – my character’s called Arthur – and I get to sing!” So it was as though the universe was giving me a second bite, and then I felt “Yes, maybe this has got my name on,” and that gives you enormous confidence as an actor, you know? You think, “I’m destined to do this”.

Proof then that, like Arthur, even aging stars get a second chance in life.

2 thoughts on “Song for Marion”