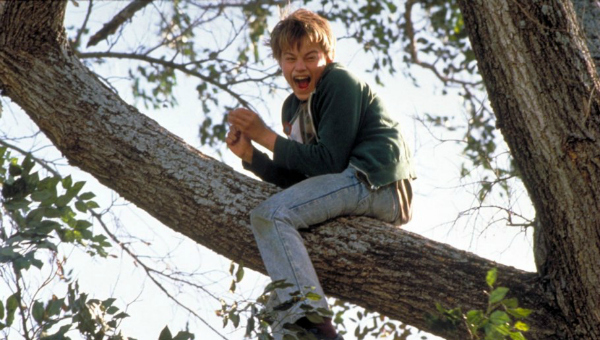 It turns out that what’s eating Gilbert Grape (played by Johnny Depp) is his 17 year old younger brother Arnie (played by Leonardo DiCaprio). Arnie has classic autism, which means that life is a constant stress on the whole family, not just for Arnie. Arnie struggles to understand social conventions and social expectations, and therefore just ignores them most of the time, doing his own thing (like wandering off or repetitively climbing the highest building in his small town in Iowa).

“The film implicitly raises the question: who has the disability?”

But Gilbert, assigned to keep an eye on his vulnerable younger brother, has to worry about Arnie 24/7. When you have a child with autism in the family, there’s not a minute in the day when something unexpected and potentially risky might not happen. Gilbert worries that in small town America, the community may not always be tolerant of those with neurological differences, and that unless he is watched closely, Arnie could be bullied or punished for acting differently. As the older brother, Gilbert feels a strong pull to protect Arnie, filling the role of both parents, since their father died and their mother has extreme obesity that prevents her from leaving the house.

The film implicitly raises the question: who has the disability? Is it Arnie, who has the diagnosis of autism? Or is it Gilbert, whose life is tied to Arnie and who will never be free to be an ordinary teenager? Or is it their mother, whose depression after her husband’s suicide has (we infer) led her to lose almost all motivation in life, giving in to over-eating? Or is it their father, whose depression led him to hang himself in the basement of the family home? We are not told why he hanged himself, but might wonder whether the stresses of coping with a child with autism contributed to this.

“… one view is that Arnie is the least disabled in the family.”

Faced with this range of answers to the question, one view is that Arnie is the least disabled in the family. Most of the time he is seen running around the town, whooping with excitement, or up in his favourite tree laughing loudly, waiting for someone to play hide-and-seek with him (apparently oblivious to the fact that his ‘seeker’ will always know where he is hiding as he hides in the same place every time; and that by laughing out loud, he is effectively informing his seeker of his whereabouts. Psychologists call this ‘mindblindness’, or a difficulty with ‘theory of mind’). Small details amuse Arnie, who laughs as he sticks his finger into the birthday cake that is waiting in the fridge, or as he climbs up the ladder to reach the top of a dangerously high building so that the local fire-brigade have to send out a crane to get him down.

His autism may prevent him from being able to easily understand the social world or make relationships, but it also confers on him an ignorance of how others are feeling, what they are worrying about or what they might think of his unconventional behavior. In this sense, he is blissfully unaware of his disability and it may not impact him. Contrast this to how it impacts his whole family, whose dynamics are tense, nerves being stretched to their limits, the mood of the family swinging from frustration to fear to desperation and occasionally anger.

“It is as good a portrait as Dustin Hoffman’s performance in RAIN MAN.”

I have met a lot of people with autism during my 30 year career as a researcher, including those with classic autism (where the person may have additional learning difficulties, like Arnie) and those with Asperger Syndrome (who may be intellectually gifted). Leonardo DiCaprio’s performance is outstanding, and if I had not known he was an actor and had been shown the film clips out of context, I would have believed this teenager really had autism. It is as good a portrait as Dustin Hoffman’s performance in RAIN MAN. Most importantly, the film has a powerful message for our society, which remains just as relevant today: that people with autism need huge levels of support, and so do their (often overlooked and forgotten) families.

Professor Simon Baron-Cohen is the Director of the Autism Research Centre, Cambridge University.

He was guest speaker at the screening by SciScreen (Cambridge Arts Picturehouse) as part of the British Association of Science (January 7th, 2013).