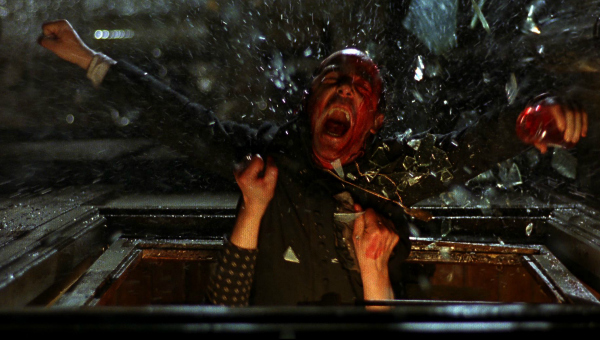 A warmly affectionate comic take on the horror genre, utilising the jet black vein of Spanish comedy known as esperpento, THE DAY OF THE BEAST (EL DÍA DE LA BESTIA) was Álex de la Iglesia’s second feature film and effectively launched his career on the international stage. The film follows Father Ángel Berriartúa (Álex Angulo), a small Basque priest who has spent his career trying to decode St. John’s predictions of the apocalypse. A startling breakthrough – which he explains in indecipherable form at several junctures within the film – sees him discover that the Antichrist is due to be born in Madrid on Christmas Day 1995. That is to say, tomorrow.

The priest heads to Madrid with the intention of committing as many sins as possible in order to draw the Devil out of hiding, gain his confidence, and foil the imminent birth. He quickly acquires a sidekick in the form of heavy metal enthusiast and all-round reprobate José María (Santiago Segura, who would go on to be responsible – as writer, director, and star – for the blockbusting TORRENTE series of films, now up to their fifth instalment) who has the enthusiasm of a puppy and the attention span of a drug-addled gnat. But Berriartúa needs an expert, and after watching television for the first time he decides that the Italian television host Professor Caván (Armando de Razza) is the man for the job.

Caván is a so-called expert on satanism and hosts a show called La Zona Oscura (‘The Dark Zone’), a bottom-of-the-barrel festival of possessions, exorcisms, telepathy and general charlatanism. Caván’s show and nationality are part of de la Iglesia’s barbed commentary on Italian investment in Spain’s private television channels (a large photo of Silvio Berlusconi is glimpsed in the television studio) and the quality of their output, but criticism of trashy television in general is a recurring theme in the director’s films. In fact, as a cynic to his core, Caván doesn’t believe the nonsense he spouts on air and regards the gullibility of his audience with disdain. So he is hardly openminded when Berriartúa turns up at his apartment needing Caván’s help to invoke the Devil and avert the apocalypse.

The extended sequence in Caván’s apartment – complete with an unexpected appearance from his girlfriend Susana (Maria Grazia Cucinotta) – is a good example of how de la Iglesia balances comedy and horror to great effect. The tone of the sequence switches between comic exaggeration and excess (whether José María clumsily breaking various tribal artefacts that decorate the apartment, or the way in which the camera excitedly follows and mimics Susana’s movements during her attempted flight from the interlopers, dipping as she bounces over a bed), bone-crackingly graphic violence (used by Berriartúa to ‘convince’ Caván to cooperate), and horror-inflected seriousness (when the invocation appears to work). The question as to whether Berriartúa is mad is raised by various people he encounters (and there is something of Don Quijote in his dedication to his quest) but not answered. However it is worth noting that as part of the invocation ceremony Berriartúa, José María, and Caván each consume a quantity of LSD: it is possible that what they experience in the second half of the film could be partly hallucinated. Either way, from this point onwards the film’s three wise men are united in their search for Madrid’s demonic nativity scene.

The success of the film, which is possibly still the director’s best (it won de la Iglesia Best Director at the Goya Awards in 1996) and certainly his most enjoyable, rests largely on the infectiousness of the humour but also the affection with which the characters were written (by de la Iglesia and co-writer Jorge Guerricaechevarría) and performed. Angulo (who died earlier this year) is probably best-known to UK audiences as the doctor in PAN’S LABYRINTH (Guillermo del Toro, 2006), but the doggedly determined Father Berriartúa was his career-defining role. De la Iglesia has developed something of a stock company and many of the actors in THE DAY OF THE BEAST (including Segura and Terele Pávez, who plays José María’s scary mother) can be spotted in those others of his films screening as part of the retrospective at the Leeds International Film Festival 2014.