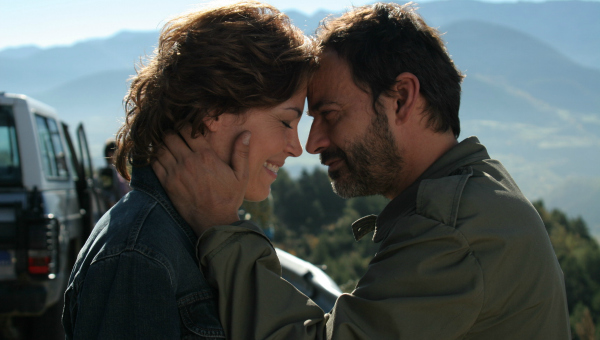 Writer-director Cesc Gay specialises in explorations of male friendships and the existential crises of men questioning their life decisions. In FICTION (2006), Álex (Eduard Fernández) – a writer-director – has temporarily left his wife and children in Barcelona and gone to stay with his friend Santi (Javier Cámara) in the countryside, in order to write in peace and quiet. Little ostensibly ‘happens’ in FICTION but the film quietly emphasises that the important things in life often occur in fleeting moments that can pass us by if we are not careful.

Over dinner with Santi, mutual friend Judit (Carme Pla), and her visitor Mónica (Montse Germán), Álex explains that his new script takes place over the course of one day, with a series of conversations between a group of friends discussing their crises (e.g. reaching an age where you question who you are, not who you wanted to be, and accepting the decisions that you’ve made). Besides sounding like the basis for Gay’s most recent film, A GUN IN EACH HAND (2013), the dinnertime conversation is one of several scenes in FICTION to highlight the inspiration art takes from life: Álex works through his personal problems in his writing, but is also an apparent onscreen proxy for Cesc Gay.

Despite its writer protagonist, FICTION relies more on glances than words.

Little-known outside of Spain, Eduard Fernández is an actor who can say more by gazing into the middle distance than many can muster with a full-blown monologue. A wordless yet eloquent example of Fernández’s emotional subtlety is the almost invisible change in his expression when Álex has a moment of self-realisation while listening to Mónica playing the piano. As with the sequences where Álex listens to the radio alone in Santi’s house, we see him immerse himself in the music, but as Fernández’s face relaxes we observe a thought emerge and bloom in Álex’s consciousness, conveyed with the barest flicker of his eyes and a twitch of his mouth.

Despite its writer protagonist, FICTION relies more on glances than words. We witness Álex and Mónica fall in love during the few days they spend in each other’s company, but neither is inclined to verbalise their desire or act on it, and a series of hesitations and half-caught glances play out in front of us. In a bar scene late in the film, the sense of what is being left unsaid is palpable and clearly evident to them both: the careful body language of Fernández and Germán captures the tension of being simultaneously comfortable and awkward in the company of someone you’re falling for. Álex and Mónica stand side-by-side but facing opposite directions – the need for physical closeness being counteracted by denial – while their suddenly stilted conversation still occasionally hits a seam of unselfconscious common ground, and the sparks fly once more.

A film where nothing (and yet everything) happens, with FICTION Cesc Gay made a grown up film about grown ups, and one that is intensely – and authentically – romantic.

FICTION screens on 6 September at 14.30 at the Cambridge Film Festival.

One thought on “Fiction”