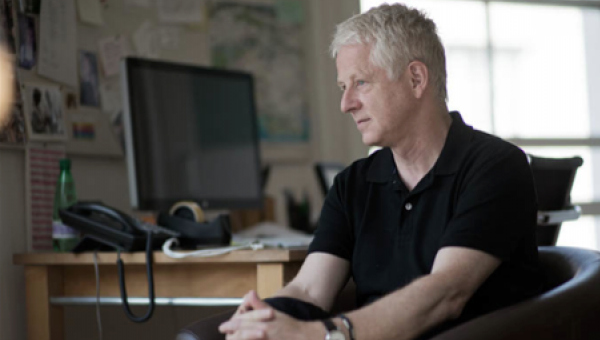 Richard Curtis delivered an insightful and spirited opening to the 2014 Watersprite Cambridge International Film Festival. Drawing upon his experience of making megahits – including NOTTING HILL, FOUR WEDDINGS AND A FUNERAL, LOVE ACTUALLY and BRIDGET JONES’S DIARY – he offered sound advice for the young filmmakers in the audience.

The first nugget: be committed to having a long-term relationship with what you’re creating. According to Curtis, seeing a project to fruition is a long, painful process fraught with setbacks – and just a few fun bits, like the first read-through and the premiere. He advised filmmakers to approach a project through as though it were a romantic relationship: from spotting a pretty girl at a party to seeing her give birth to your child in the delivery room.

Curtis hopped on the first plane back to Blighty, later to be sued by MGM.

Curtis’s career in screenwriting began simply because a guy called Michael asked him to write a film. He came up with the concept for his first screenplay, intriguingly titled FOUR EYES AND FAT THIGHS, on the London Underground en-route to his first meeting with Michael. At third draft stage, Curtis had a tough time pitching the idea to a studio in L.A. which, despite “loving it,” had reservations about the leading characters, thought the story too English and hated the title. A partial breakdown and a temperature of 103 degrees ensued before Curtis hopped on the first plane back to Blighty, later to be sued by MGM.

This colourful anecdote provided the context for his second piece of advice to those entering the film industry: work with people who produce work like the kind you want to create; whose behaviour you can tolerate/work with; and don’t be seduced by bigger names and bigger pools. Curtis freely admitted that even the most well-conceived production teams don’t always live happily ever after. He was attacked with a plastic knife during a flight by a director for granting approval with the half-hearted phrase “yes-ish.” And, on set with Hugh Grant, he resorted to delivering feedback to the actor via the hushed whispers of the Grant’s hair assistant, rather than face the director’s wrath for continually interrupting filming. It was the perfect solution until the director wanted to fire the hair guy for messing with his flow, and changing the way Grant acted.

The third area of guidance was about how vital it is to get the editing right, which in the opinion of Curtis can make or break a film. Don’t assume that once you are gifted with a great idea, there’s then nothing more to do. The examples Curtis used to illustrate this point were taken from blockbusters that the vast majority of the country will be familiar with. It was fascinating to hear how he felt that the success of LOVE ACTUALLY and FOUR WEDDINGS AND A FUNERAL hung in the balance before cutting floor crises were overcome. It is easy to appreciate how LOVE ACTUALLY, with its ensemble structure of intertwining stories, could have been an editing challenge. Curtis explained that the film evolved from one that left each narrative hanging before the viewer had time to care about the characters, to one that landed emotionally by the power of good editing alone.

For example, the memorable opening scene of NOTTING HILL, featuring a montage of Julia Roberts footage to the romantic tones of “She” by Elvis Costello, was actually an editing after-thought. Curtis also revealed how the reordering of one scene saved BRIDGET JONES’S DIARY from being an unremarkable story about first-world problems. Faced with a film about a pretty girl with a fun job who had two handsome men fighting over her, they made the bold decision to move the well-known scene of Bridget singing “All By Myself” to herself while drowning her sorrows in a large glass of wine, from the midpoint of the film to become the opening scene. According to Curtis, this was a fundamental shift that sensitised the viewer to Bridget’s vulnerability before the opening credits had even finished rolling.

Curtis had faced a similar dilemma with FOUR WEDDINGS AND A FUNERAL a few years earlier. He had found it difficult to reconcile the death of Gareth making the other characters believe in the existence of true love worth waiting for, with the scene that immediately follows, where Charles rushes into marrying Duck Face – clearly the wrong girl. It took Curtis some time out on a family holiday to decide the only way for this run of events to make sense was to introduce a connecting scene where Charles is badly advised by Tom, who has only ever found love thus far with a pet Labrador.

Even for an established comic like Curtis, the jokes are hard to come by…

Curtis credits much of his success to writing about what he knows, and from the heart. For this uncomplicated hay fever sufferer from Camden Town, that is families, friendships and love; both unrequited and reciprocated. He urged young filmmakers to be true to the experience of their life. Aptly for the occasion, Curtis told the audience that a chance meeting with a female guest at the wedding of Watersprite Festival patron, Hilary Bevan Jones, inspired FOUR WEDDINGS AND A FUNERAL. He also explained that his recent release ABOUT TIME was motivated by the loss of three family members, highlighting to him how vital it is to cherish the most ordinary of times we spend with loved ones. Offering insight into the way he writes, without prescribing it as the only way to write, Curtis described how he never leaves his desk without drafting some notes-to-self to inform his work the next day. He conforms to the “write lots, perfect later” methodology, usually churning out 20 to 30 pages a day.

Curtis was joined on stage by his long-time partner Emma Freud OBE (who might have agreed that not marrying Curtis was something she could do for the rest of her life, in the spirit of FOUR WEDDINGS), for a Q&A session. At the risk of seeming “a bit Richard and Judy,” she shared her cute script feedback system comprising terms such as CDB – could do better, NQR – not quite right and at worst, SEE ME. Even for an established comic like Curtis, the jokes are hard to come by. He takes notice of what makes him laugh as he writes, and underlines it for good measure – if he doesn’t have a chuckle himself, he cannot envisage how anyone else will find it funny. While recently the issue of provenance has been brought to the fore, with films like GRAVITY and 12 YEARS A SLAVE being claimed as British, one thing is clear: Curtis has made some of the most characteristically British films of all time, that are unarguably as likeable and charming as the man himself appears in the flesh.