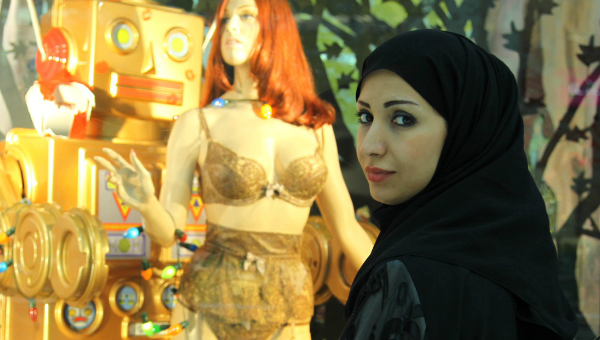 The world premiere of Mark Cousins and Mania Akbari’s new documentary took place in Screen 1 of the Filmhouse cinema yesterday at the Edinburgh Film Festival. A recent guest at the Cambridge Arts Picturehouse with his film A STORY OF CHILDREN AND FILM, Cousins is a great enabler and exposer of world cinema. Either through his monthly article in Sight & Sound magazine, or his expansive film essays, many of us have Mark to thank for introducing us to the work of Iranian director Mohammad Ali Talebi, and now to the work of his fellow countrywoman, Mania Akbari – who lives in exile in London.

LIFE MAY BE is not really a documentary, more a five-part love-letter correspondence between Mark and Mania, composed in an elegiac and measured manner. The first two letters are standard in their structure – Mark introducing himself to Mania whilst filming the mist rolling down over a loch on the Isle of Skye, and Mania responding with photos and short video footage of the life she left behind in Iran.

Is nudity the most freeing form of artistic expression?

Mark’s reply to Mania then takes place in a shot of him spread out across a sofa, Pringles tube and can of lager to hand, typing his response to her on a laptop. If you’ve ever wondered what a narrator is doing when recording their voice-over to a film – an air-conditioned recording studio comes to mind – then this image of Mark lying down, gradually stripping off and freeing himself from the trappings of clothing is a revelatory one. Even if it is alien from our expectations of a narrator, somehow it works. Should we strip off to watch this film? Mania’s response to Mark verges on the sublime and breathtaking.

Is nudity the most freeing form of artistic expression? For a cross-dresser to change out of their gender-defined clothes into their non-conformist clothing choice is surely just as much of an artistic statement as getting one’s wang out on the Scottish highlands. The film does a great job in making us ask ourselves these questions; and as a narrator, Mark’s voice is one of the most pleasing in contemporary cinema. For LIFE MAY BE’s 85 minutes, we transcend into the hearts and minds of two filmmakers representing their thoughts on love and the visible/invisible parts of the body, and become privy to an intimate correspondence between two greats of contemporary world cinema.

2 thoughts on “Life May Be”