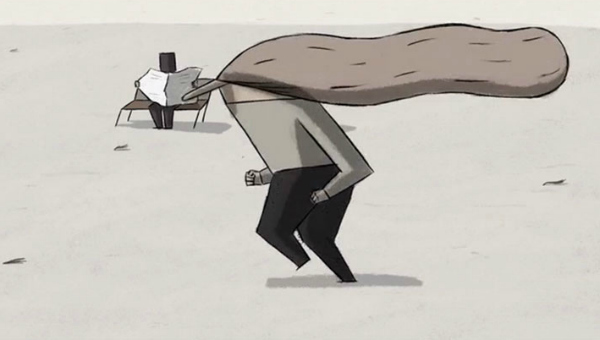 In what might look like a prophetic vision of the near future in the United Kingdom, WIND presents us with a society adapted to its extreme weather conditions. Its astute observations on humanity’s strong-wind coping strategies are razor sharp, but its clear that the wind is only a tool being exploited for all its entertaining animation potential.

Throughout the short film, the viewer is introduced to a selection of this world’s inhabitants with which many viewers will be sympathetic. They go about their mundane daily activities completely accustomed to the adverse effect of such extreme conditions. Bar keepers, mothers, dog owners and men with hats all have all completely adapted to compensate for their difficult environment.

It militantly clings to its blustery motif, and consistently delights the viewer…

Each skilfully animated and astutely observed vignette invites the viewer to experience the old tradition of presenting and enjoying movement through animation. The concept is basic and it’s a joy to watch a short film so stubbornly concerned with its own medium; especially when it’s executed so well. The character and location design also aids and abets the film’s single-mindedness as it doesn’t allow any interruptions that would eject the viewer from animation’s splendours.

Robert Löbel’s award winning animation is concise and focused. The finely tuned visual design is uniformed perfectly with the narrative’s goal and the playful animation. It militantly clings to its blustery motif, and consistently delights the viewer with the joys of animation throughout. In direct opposition to the relentless battery from the animation’s main subject, WIND is an amusing and cohesive short film that carries the viewer smoothly through its four charismatic minutes.

Read our interview with the filmmaker here.

One thought on “Wind”