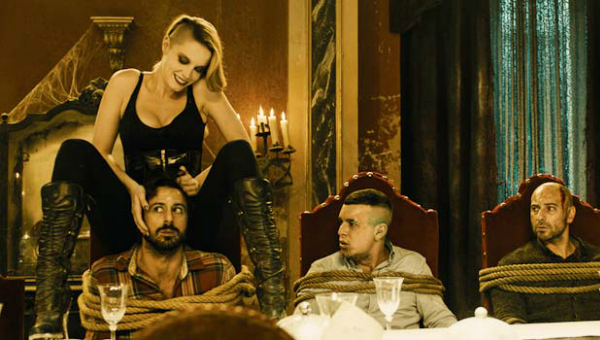 After the muted anger of his depiction of the financial crisis in AS LUCK WOULD HAVE IT (LA CHISPA DE LA VIDA) (2011), Álex de la Iglesia returns to the mayhem and excess of his cinematic roots with WITCHING AND BITCHING (LAS BRUJAS DE ZUGARRAMURDI) (2013). José (Hugo Silva) and Toni (Spain’s current heartthrob of the moment, Mario Casas) rob a Cash Converters outlet of a drawer full of gold rings using José’s young son Sergio (Gabriel Delgado) as a lookout. A botched getaway sees them commandeer a passing taxi complete with driver Manuel (Jaime Ordóñez) and a hapless passenger (Manuel Tallafé). They hope to make the French border but, in addition to having José’s ex-wife (Macarena Gómez) and two policeman (Secun de la Rosa and Pepón Nieto) in pursuit, they find that they have to pass through the cursed village of Zugarramurdi. And then things start to go really wrong.

The village was the site of 17th century witch trials, and is still home to a coven of witches (grandmother, mother, and daughter played by Terele Pávez, Carmen Maura, and Carolina Bang respectively) who spend their time tormenting male strangers who have the misfortune to cross their path, and waiting for a child known as ‘the chosen one’ who will restore the witches to former glories. Not only do they think that Sergio is that child but the stolen loot seems to have a totemic power (Manuel has already claimed that what they’re carrying is cursed, as the pawned gold rings represent failed relationships, economic hardships, and desperation) that will help them unleash the apocalypse. All that stands in the way of mankind’s destruction is the irresponsible José and dim bulb Toni (all credit to Casas for being considerably funnier than previously suspected). But then Eva (Bang) lets the dark side down by starting to fall for José, so perhaps the balance is in their favour after all…

This builds to spectacle on a grand scale as Graciana (Maura) invites all of their female (witch) friends (including a dragged up Santiago Segura and Carlos Areces) to the sacrificial ceremony where they invoke a lumpen giant of a monster to test Sergio’s credibility as the chosen one. The special effects are generally slickly done (Maura and Pávez both seem to enjoy scaling walls and flying through the air) and de la Iglesia’s taste for an energetic style of mayhem carries the story along at breakneck speed, presented with atmospheric flair.

All three main actresses have worked with the director multiple times and despite regular accusations of misogyny in relation to his depiction of women, de la Iglesia nonetheless creates characterful female roles. The director’s counterargument to the charge of misogyny in his films is that the women he puts onscreen are always smarter than the men, which is often true but doesn’t reduce the bitter taste that some of his depictions leave behind. In WITCHING AND BITCHING, the first half of the title obviously refers to the female characters but the bitching is entirely down to the men, each one of them a self-pitying chauvinist who blames women for his own poor choices and behaviour. The women they meet in Zugarramurdi, an almost entirely female society, are beyond their ken: José and Toni are out of their depth.

Despite the size of the cast and level of chaos in full flow, de la Iglesia successfully delineates the characters (each has at least one standout moment of their own) and never lets their confusion be shared by the audience. Likewise, the robbery with which the film starts is an expertly handled action set-piece that sees the director once again combine violence, absurdity, and manic comedy: this is likely the only film you’ll see where Spongebob Squarepants wields an automatic weapon and is shot down by the police. After the darkness of THE LAST CIRCUS and AS LUCK WOULD HAVE IT, de la Iglesia returns to the mayhem-ridden romps that made his name and a wild time is had by all.