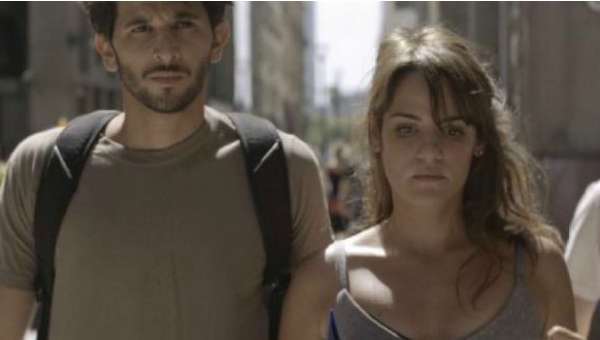 Go on. Admit it. You love hearing couples spatting in public. THE FIRE (EL INCENDIO) buzzes with that vibe. But unlike, say, eavesdropping on a grievance detonating loudly in a museum gallery, this isn’t funny. Mesmerising, maybe. But definitely not funny. The frizz of a relationship gets well and truly doused and we’re all playing gooseberry.

Plenty of other break-up films, like BLUE VALENTINE or WHO’S AFRAID OF VIRGINIA WOOLF?, serve the pain. What Argentine director Juan Schnitman nails here is personal space. Or rather, how couples battle with it in cramped flats. Lots of scenes pose thirtysomething couple Lucia and Marcelo around the one place where privacy is laid to siege: the bathroom.

At first, it’s mostly smiles as Lucia and Marcelo awake and hastily ablute in tandem. They are about to buy a new flat, and various items have already been packed. Marcelo remains unshaven. As the anonymous quote goes, ensuite bathrooms are a major factor in divorce. Ditto bathroom sharing, perhaps. Later, Marcelo uses the bathroom as a refuge only for Lucia to trespass upon his shower. He’s dared shut the door and she slinks into the tub to force him to acknowledge her – but he won’t accept her, even in her naked state. She forces a hug out of him. He averts his gaze before fleeing. She slinks into her own shower. The shower gel might as well be laced with creosote. Later still, Lucia storms off to a party and leaves the bathroom door open as she slaps on the makeup. Now it’s look and don’t touch.

THE FIRE bristles with the energy of the performers.

If bathrooms represent the space where these characters can’t hide, then work does grant them respite. Lucia snags a cheeky fag from a colleague, and Marcelo faces the consequences for disciplining a kid in his class. His run in with the kid’s parents raises the most troubling aspect of the film. He’s dragged the teen from a class by his neck. In isolation it might not be so bad but a violent edge to Lucia and Marcelo’s relationship emerges. At first, it’s play-fighting for that moment too long – leading to a somewhat forced clinch. Tit-for-tat sparring, of the kind that glistens in SHIRLEY VALENTINE’s flashbacks, runs out of control. Later, angry sex at a party has a sadomasochistic edge. The dilemma here is whether this behaviour is normal for them, whether it is plain abusive or, worst of all, both. Consent is definitely there for both bouts of the rough stuff, but is this causing the strife? Marcelo’s later behaviour suggests the latter. Schnitman deliberately keeps this vague, though arguably giving the film more of a villain than it deserves.

THE FIRE bristles with the energy of the performers. Much rests on Pilar Gamboa’s sense of unease. Several characters comment upon how her character Lucia never smiles, and Gamboa projects this notably with several hundred-yard stares. Juan Barberini for his part captures male incomprehension at emotions well. Such is the tension that early on it feels like it might be a thriller. After waking, Lucia and Marcelo head to a bank vault with bundles of dollar bills under their clothes. As they return home, defeated from buying a new house, they divest themselves of their money pouches. She yanks her pouch off downwards, like a pair of knickers. He tears open his trousers at the fly. The director plays the strip as a parody of intimacy. With everything else failing, money binds them still.