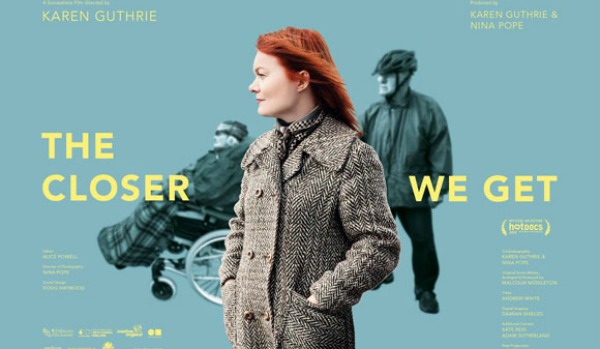 THE CLOSER WE GET opened in cinemas Friday 6th November. The self-portrait documentary follows Karen Guthrie as she cares for her ailing mother, whilst discovering the past and present of her father’s previously hidden personal life.

Edd Elliott (EE): Karen, thank you so much for the opportunity to talk to you today – and for THE CLOSER WE GET! I found watching the film incredibly personal and moving. Maybe a good place to start is with the origins of THE CLOSER WE GET. It’s referenced in the film that this wasn’t the story you originally intended to make…

EE: So at what sort of time did the movie as we now have it take shape?

KG: It was quite a few years after that (original) interview I had had with my mum that you see at the beginning of the film. I was coming home every other week and I was killing time with her really, and I said to her one afternoon “Do you remember that film we talked about doing?”. And she said “Yeah, yeah. Why don’t we just get on with it?”.

But (at that point) it was going to be a film about us in a room. I didn’t know that my Dad was going to move back in. I was just happy she wanted to do something really. And then I started to bring the camera home, and we proceeded organically from there. It was always something she looked forward to. So for a long time it was just something that was part of day to day life really.

EE: “Organic” is a great way to describe the film. There are a number of dramatic events that happen in THE CLOSER WE GET that appear to come as a surprise – and were a surprise, I’m sure. It must be a very difficult process reacting to these moments as they arise?

KG: Well to be in it and to be editing it, with life progressing as well, you have to take a step back. To have that all on film, it’s really quite strange – a psychoanalyst would have a field day.

I think it’s brilliantly edited. My editor Alice (Powell) did a great job, and it’s a sign that it’s brilliantly edited that it feels natural. Of course it’s not – it’s entirely a constructed reality. We tried really hard to distil everything, so even the voice over is really sparse, but it still feels intimate. The same with the scenes: we had countless brilliant scenes, and we really had to make those difficult choices. “Of these five brilliant scenes, which is going to give us the most”. As a film maker that’s an incredible challenge as I was in love with all the material.

EE: There are dynamics in the film which are hinted at but not fully shown – left for us to infer. It must have been a very difficult process deciding what moments were the most relevant. Particularly with characters such as your half-brother, Campbell, for whom the story is a little different…

KG: For me, the scenes in the home, it was as much about what was not said as about what was said. We’re not a family who talk a lot – that’s what the whole film is about really. So I wanted to prepare the audience with the rhythm at the beginning. That this wasn’t going to be a film where people asked questions, got answers and had a big shout. It was going to be a film where you had to sit with these characters, you had to like them and find interest in them, and you’d have to wait and make up your own mind about people.

With Campbell, you know, it was different. He’s quite a quiet soul and he has a real presence in the film, but it’s not because of what he says. In a way Campbell is the least affected by the story of all of us. He has other challenges in his life. He’s a kid without a nationality, after all! But we were never a secret to him; there was never that weight on his shoulders. Where there was always that secret for us that was hidden and discovered.

EE: That’s a really interesting aspect of the film that I hadn’t picked up on – that others in the family may have had different perspectives on events. Obviously the film is very much about you, and you growing to understand your parents as more than just parents – as normal human beings.

KG: And it’s a self-portrait as a film. I’m sure many of my siblings wouldn’t view the family story, either in the past or the current events, in the same way I have. I was going through trauma when I made the film, and I tried to be really honest about how that was making me think about the past and the present. I wanted to keep a kind of rawness to it… There is a kind of emotional rawness to it that I tried not to self-edit too much.

EE: The incredible honesty of the film is astounding at times. There’s a scene when you are talking to your mother about your father and I think someone says “I don’t think he knows the damage he’s caused this family”. At the time we don’t know the full meaning, but it comes to be very significant. Has your father seen the film?

KG: He has! He watched it privately first, and then we went together to the Edinburgh Film Festival premiere, and saw it in a room full of strangers and fielded questions. He was incredibly brilliant. He’s incredibly proud of the film and its success.

In the end, although we see him in some harsh scenes … I think he realises that it’s compassionate and a loving portrait of him. He respects that really. Maybe it feels quite good to be 80 and have no secrets left.

a psychoanalyst would have a field day …

EE: The end of the film is ambiguous – and of course we don’t want to give away anything of what comes. Was there an easy, natural point for ending the film? How did you decide what was going to be the final note?

KG: No, it was very, very hard. Life was continuing and I knew the film couldn’t go on forever. And even in the last months when my mum was getting very ill, I always knew that it wasn’t going to include her death. That wasn’t important for the film. So I wanted to acknowledge it, but I was also very keen not to make it a scene. There’s no point in that – that’s not relevant.

It was incredibly hard knowing when to finish it. Because I had so much lovely stuff and it was really good for mental housekeeping. Making the film was part of my recovery from the trauma. Ending the film was ending that period – the recovery – and that was kind of sad in a way.

EE: I think the amazing part of THE CLOSER WE GET is its ability to find those feelings of family hardship and grief. For my own part, I lost my Grandma last year to dementia and watching the film really reminded me of those periods I had with her late in her life …

KG: I think it is that sharing. I think it’s a reason a lot of people enjoy the film. They share their feelings afterwards with me and with each other and start sending emails. Because so many of us are going through these really horrific traumas, that we’re not prepared for, and we don’t share it sometimes with those around us. When you come and see a film like this, it brings it all back to the surface. For some people it helps them process it in a way, as I’m saying “It’s alright, I went through it – you’ll get through it too!”

I do feel like a survivor sometimes. I feel like I’ve run out of this car crash with a flag waving. Not the film, just the life experience and that trauma.

THE CLOSER WE GET is in UK cinemas now.