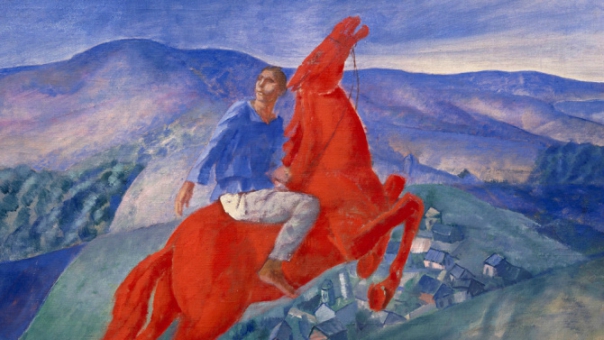 REVOLUTIONS: NEW ART FOR A NEW WORLD takes as its starting point the explosion in creativity in the arts at the outset of the Russian Revolution. Margy Kinmouth’s brisk 86-minute documentary offers a brief overview of a small window in time where political upheaval and creative innovation went hand in hand.

The documentary has two assets in its favour: access to artworks stored in Russia’s museums that have been out of the public eye for decades, and interviews with the descendants of the era’s most influential figures. These give an immediacy to the historical figures and works under discussion. From the start, Kinmouth emphasises the use of art for political ends by the newly established Bolshevik government, showing clips from Sergei Eisenstein’s epic OCTOBER which dramatised the storming of the Winter Palace. From the very beginning, artists were part of the political project. This connection goes beyond individual artists: an early section of the film details the ideological struggle between the traditionally-minded Petrograd (now St Petersburg) Academy of Art and the more avant garde Moscow Institute of Art. The Moscow Institute gained the support of the Bolsheviks and became the official state body for the visual arts.

… a time when the possibilities of politics and art seemed endless …

The film crosses a relatively short period of time, from the October Revolution to the political crackdowns of the 1930s under Stalin. The cast of characters include celebrated figures such as Marc Chagall and Wassily Kandinsky, who both found fame while in exile from the Soviet Union. However the film’s strengths lie in highlighting the lives and works of more obscure artists who had been forgotten or erased from history. These include Kuzma Petrov-Vodkin, whose innovative use of colour and perspective made him one of the most iconic artists of the early avant garde. An interesting but under-explored aspect of the film is its treatment of connections made across different strands of art, including theatre, dance, photography and cinema. We are shown works by filmmakers Eisenstein and Dziga Vertov, graphic designer Alexander Rodchenko and theatre director Vsevolod Meyerhold, who were all part of the growing avant-garde movement across the 1920s. These give a sense of the wider innovation in early Soviet art, but the film fails to tie them back to the painters it is most concerned with.

After Lenin’s incapacitation and eventual death, Stalin’s coming to power marked a change in the state’s attitude towards the arts. It was the beginning of the era of “socialist realism”, which took a didactic approach to representation. Abstract art was out of fashion, and many artists were caught up in the waves of political repression that followed. Those who could not emigrate were often arrested, and many died in prison or work camps. To add to this, numerous works of art were destroyed by order of the state. Some curators went to extraordinary lengths to save the condemned artworks, including hiding them in the walls of their galleries. A few artists carried on working in other areas; for example, abstract patterns were still tolerated on pottery and tableware, and these fields became a haven for dissenting artists in the new climate.

The film ends by noting the rehabilitation of many of the artists, often after their deaths, and the restoration of their works to public view. Taken together, the paintings shown represent a short-lived but optimistic time, when the possibilities of politics and art seemed endless.

Following the screening at Cambridge Film Festival, REVOLUTION: NEW ART FOR A NEW WORLD is in cinemas nationwide for one night only on 10 November! Visit this page for further information: http://revolution.film