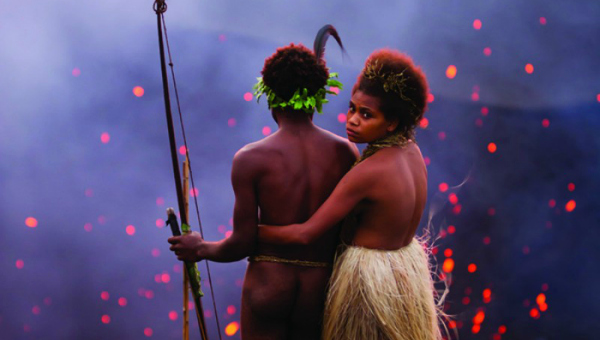 Wales One World Film Festival takes place every year in Cardiff, Aberystwyth and Swansea, a unique showcase of world cinema and an opportunity to meet and talk to international directors from around the world. This year’s programme included films from Chile, Japan, Tibet, Albania, Canada, Russia, Indonesia and many other countries.

‘Cardiff needs to connect with the world’, David Gillam, Director of Wales One World Film Festival suggests. This is my third year attending the WOW Film Festival in Cardiff. “Connecting with the world” is what I still feel, walking out from each film screening. For those who research film and cinema, the magical moments that this medium offers are difficult to explain. The experience is what counts, and everyone will learn different lessons from that personal cinematic encounter. Once upon a time, my dream was to run a cinema of my own, so that I could share my favourite films with the audience, and take them to an adventurous travelling journey around the world. David Gillam’s WOW festival, the longest running international film festival, reminds me of this forgotten dream. During the festival, I had an opportunity to conduct an interview with David, about his passion, and his WOW Film Festival.

Hiu M Chan: David, I think this year’s festival has been a real success. What was your initial idea of launching an international film festival in Wales?

David Gillam: This is the 15th year of WOW Film Festival. The initial impulse was when I began to watch films at different festivals: films from Cuba, Mexico and many more places. I then realised that these films were not available in Wales. I thought that perhaps people in Wales would also be interested in seeing these films, to see cultures and countries that aren’t seen on our screen. So I went to cinemas in Cardiff, Aberystwyth and Swansea to ask, “can I just borrow your cinema for a week, and see if there is an audience?” And there was, people loved it! Here I am, still doing it after 15 years.

HMC: Is it a challenging job to run a film festival as a director?

DG: It’s a lovely job! It’s the best job ever in the world, I would say. But it’s got harder, in the way that there is now less money to support film festivals like this. We have lost half of the funding that we used to have years ago, because of funding cuts. It is now more difficult in terms of the staff we can employ, the money we can spend on the films and so on. Yes, it’s definitely got harder. On the other hand, we have a lot of films coming to us, because we are now more established. We used to have to go to festivals, to travel and see films, but now we can pick films from Youtube at home. But still, it’s challenging in a sense that people’s expectation has changed. When we started, there hadn’t been a Brazilian film being played in the UK for maybe 5 years; when CITY OF GOD (2002) came along, then more films followed. That means that we have to look further for things, for something different.

HMC: True. In the recent years, there is also a rise of arthouse cinema chain in the UK, which their ethos is to promote world cinema in terms of both distribution and exhibition. Would you see them as a competition that to some extent is making independent film festival more difficult and challenging to run?

DG: No, not at all. The more people are doing it, the more people are aware of the variety of cinema that is out there. I mean, half of our films were from those distributors. Nowadays, a lot more are out there comparing to few years ago. The British Film Institute has recently established a fund toward specialist world cinema. Because there is a massive drop of audience in those kinds of films, so they’re concerned that the audience is falling away. So they are putting money into supporting small and specialist world cinema distribution and exhibition, which is what we have been doing for 15 years.

One of the very important values is to understand other people’s living, and that is what WOW Film Festival aims to do here.

HMC: Is it difficult to put an exciting programme together? What do you have in mind every year when it comes to programming?

DG: Yes, it’s really exciting to be able to go around the world, and to see what films people are making. There is a huge growth in independent filmmaking across the world. I tend to just go out to look for films that really excite me: films that have something unusual about them, maybe a little bit more unpredictable. I have seen too many films after the first 10 minutes, knowing that where I will be in the last 10 minutes. Well, that’s partly because of being an old man, who has seen many films and so on. Okay, it may be a film that is made in Argentina, but perhaps I have seen similar work that is made in New York and other places. I’d like to see things that are a little unpredictable, that take you to a journey which you have not been before. In general, it is a pleasure to be able to put a list of films together, to share with other people, to listen to their feedback, and to what they have to say about the film.

HMC: Could you tell us what the WOW factor is for this year’s programme?

DG: Well, it is always the opportunity to see films from other countries that you won’t necessarily be able to otherwise. The big theme we have for this year is the ‘F-rated’, films centre around women, either made by female directors, or films about women. The sexist issue is highly visible in Hollywood, whereas in world cinema, women tend to just make the films they want to make: so in fact, this situation is better with world cinema. And you’ll see the theme keeps coming back over and over again in this year’s programme. I didn’t do it deliberately, I just went out to seek the best films I could find; and realised that there is a season there, and a spotlight perhaps would get people’s response. Many of these films have a quite clear theme on women. So yeah, I think perhaps that is the case, the main characteristic of this year’s programme.

DG: Indeed. The relationship with universities is quite interesting. I think the universities’ attitude is changing too. When I started the festival, I was quite naïve, thinking all young people and students should see these films. I contacted them, and contacted their lecturers and so on: they would come, the lecturers. But after about 10 years then I realised that the lecturers would come, like in Aberystwyth, because we are on campus there, but not the students! However, I think in the last few years, universities have become a little bit more outward looking, interested in being involved in public events. This year we have been working with Cardiff University, to invite Chilean director Patricio Guzmán to come and give a talk. The university has kindly provided some financial support toward this event. I think building those relationships takes time, while universities still have their ways of doing things. The Festival comes and goes in a week. We would like to involve not only lecturers, but perhaps to include more graduate students and even undergraduate students. As a festival, we are also happy to go to other places. If students are not coming to us, we can go to them, to the campus. Doing a screening at the university lecture hall, to do a talk and so on, we are very happy to do that.

HMC: What is your future plan or future scope for the on-going festival?

DG: To keep going! I think it’s very important for a country like Wales to have an international perspective, not too inward looking, and to be connected to the world. I think showing films is a good way to do that, to have a sense of how people are living, what the global issues are. We are all affected by migration, climate change on a much global level, and having an awareness of that is hugely important to people. Hopefully, more people would understand the world we live in, and to have some empathy toward other people. One of the very important values is to understand other people’s living, and that is what WOW Film Festival aims to do here.

DG: Yes I agree. I think WOW is entirely an educational project. Watching a film is itself educational, and through that we can learn things about other people around the world. We also try to do discussions after the film, we have tried to bring filmmakers down, and we have done three master classes already in the past couple of days. The filmmaker Patricio Guzmán, one of the most famous South American directors, came to talk to the audience here, and we had a lot of young people in the audience. Through the collaboration with Cardiff University, I think we finally managed to have some students here, to listen to the directors talk. It was also a very engaging event, and open. Some students had some really interesting questions to ask him, and he was very pleased about that. This is quite different from a traditional way of education I think, and young people respond to that quite well. It was a great event.

HMC: If I asked you to say some words to students, to encourage more of them to participate in WOW and other international festivals next year, what would you say?

DG: I just think it will blow your mind! I just think it’s hugely exciting to see these films. I mean when I was their age, I didn’t have this opportunity. I could only see Hollywood film, British film, a few French films and that’s about it. To be able to see a film from Japan – it just didn’t make any sense back then. The opportunity to see these films, I think, is fabulous. I think they should just enjoy it, to open their eyes to the world and have some fun!